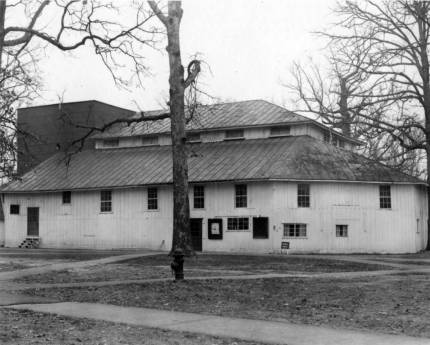 Tabernaculum, from the Latin, means hut or tent and is a term found in the Old Testament Book of Exodus where a Biblical tabernacle is described. In the history of the institution, the need for a large meeting hall became evident rather early (1871). Originally sited at "the Bower" in 1872, an open, no walls or roof Tabernacle was constructed with log seats on the north edge of the ridge. Not until March  19,  1874, was  approval  for a covered building voted by the Board of Trustees. Fairchild, Johu Hauson aud William Hart (Secretary aud Treasurer of the College, 1870-?, aud Trustee, 1873-87) sited the building with stalces aud final approval was voted by the Board on October  19, 1876.  During  these  same years,  the  City of Boston, MA, hired Frederick Law Olmsted to design their public park system.

Under the direction of Josiah Burdette (Berea's Supervisor of Construction aud Woodwork, 1903- 1917; College Trustee,  1885-1903;  first  Chairman of the Village Board; and rather-in-law of Berea's first Mayor, John L. Gay) beams for the Tabernacle were raised during 1876. During June, 1877, a working bee  and strawberry festival were arranged to assist with raising funds for further construction. Burdette was also the general contractor for the Carnegie  Library,  the   College's  Main   Chapel and numbers of houses in town (e.g.,  "ARK" House aud H. E. Taylor House).  The  Tabernacle was to have shingles, the outside would be of  rough sawed lumber and the center section had a raised clearstory and open rafters. A  committee was appointed to see that the construction was finalized in time for Commencement in June, 1879 (PCM, April 6 aud June 4, 1877). Upon completion, commencement exercises and large public gatherings were held in the building that could seat up to 2000 people. John A. R. Rogers used the structure for teaching arithmetic classes; it was consequently called "Preacher John's blab school" ( Berea Citizen, September 6, 1973; September 13, 1973). A "blab school" had all classes or levels reciting the lesson out loud and at the same time. In President Frost's autobiography he writes that the building cost  $1,400.

The Tabernacle was rather like a large drafty barn; all the walls were filled with see-through cracks, but for better "planned" light and air circulation, windows were ultimately installed. By 1887, the building was also used as the men's gymnasium until  Seabury  Gymnasium  was  built  in  1928. Following rain-soaked commencement exercises in 1900, donor Helen Gould gave money to replace the leaking roof in 1902; but when the Main Chapel burned  to the  ground,  1902, the Tabernacle was caulked, wood stoves were added for heat and cotton cloth was nailed in place to create a ceiling. Chapel services could now be held in its large open hall. However, that same year, Frost had to curtail conferring an honorary degree on a visiting dignitary because pounding rain on the tin roof drowned out his voice. In 1907, $5,000 was raised to upgrade the Tabernacle and Professor James Watt Raine, Head of the English Department, designed and supervised modifications to the building so that it could serve more comfortable purposes. It was only at this time that a floor was constructed. During 1918, the Tabernacle served as a military training facility.

The Tabernacle became the drama building in 1929. Prior to this time, Dr. Raine had produced plays in Main Chapel, later to be named Phelps Stokes. In 1931-32, Dr. Raine (1906-39) and Dr. Earl Blank with the Dramatics Club took charge of remodeling the building once again to become the "complete headquarters for the Dramatic Department": the east roof was also raised on the west side to accommodate raised scenery screens, a stage was constructed, more cracks were stuffed, walls were lined with celotex to improve acoustics, smoke stacks were built, an auditorium to seat 500 was created, and the roof was raised; a paint and carpentry shop were added to the facility; an office, sewing and costume room and two make­ up rooms were included; and new ceilings were created by using stretched cotton cloth (PCM, June 20, l 93l ;Berea Citizen, October 1, 1931, 2;Berea Alumnus, 18:2, 1947, 66-71). This white and green, multi-sided, board and batten, tin roofed "barn" was destroyed by fire on September 4, 1973. The building was fully insured ($190,000). To replace the structure, the Jelkyl Drama Center was constructed in 1979-80. 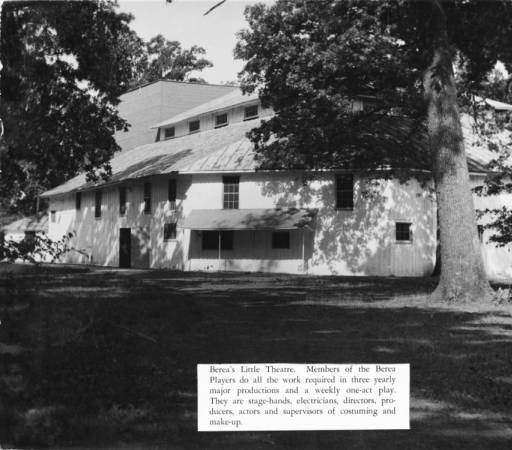