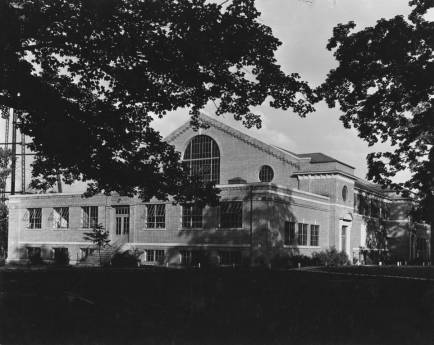 For a men's gymnasium, the Olmsted Associates and Cleveland Cady suggested a site on the edge of the ravine close to the men's athletic fields but in a location that would block the view of the College Power Plant and Laundry ( Olmsted to Frost, May  10, 1917). Actual plans for this building  did not begin until  1924. Charles Seabury was Chairman of the Board of Marsh  and McLennan Insurance Company, Oalc Park, IL, and a member of the Berea College Board of Trustees (1929-63).  [Three different Seaburys have served as College Trustees: Charles Ward Seabury (1929- 63), John Ward Seabury (1963-88) and Charles Ward Seabury II (1991-).] Charles W. Seabury and his wife, who was Director of the YWCA in Chicago, gave $150,000 for the project and the College Trustees assumed all additional costs for equipment and furnishings. During December, 1927, each College man gave an hour of time to help dig the foundations for the building, and it was hoped the building would be complete "by the time the snow flew in 1928".

Upon its completion, the Seabury Gymnasium was the finest facility in the state of Kentucky. The structure contained a pool, a basketball court that seated  1,200 spectators  on the floor  and 700 on the upper cork floored track, and a small gymnasium, sixty-five by forty feet. The floors were maple, walls were covered with glazed brown hollow tile and buff brick and the steel skeleton of the roof was left exposed and open. The pool, seventy-five  by  thirty feet, had  a  balcony where one hundred spectators could be seated. Four handball courts, a wrestling and boxing room, squash courts, offices and men's showers  and locker room were located in the basement. J. H. McCurdy (International YMCA), Mr.  Seabury (donor and Trustee), Rexford C. Quimby (Physical Education Director) and student Wilson Evans (class of 1930) spoke at the dedication ceremonies. Mr. Seabury dedicated the building "to the balanced life" and it was accepted as a place where "every man's potentialities  [may be trained]  to more efficiently serve the larger  group (Berea Citizen, November 15, 1928, l; November 22, 1928, 1). A baccalaureate degree in Physical Education  became a reality in 1950.

The "basis of both men's and women's physical education had been the Goldthwait exercises with their emphasis upon correct body mechanics" (PAR, 1940). It was hoped that this new gymnasium would provide the men "who participated in regular physical education activities: organic power, neuro-muscular power, development of leadership, cooperation, individual capacities and a hospitality to visitors" (Berea Citizen, June 16, 1927, l; July 26, 1928, 3; and Berea Alumnus, December 1931, 5). The engraved Bedford stone plaque on the external west wall states: "A gift of sacrificial love dedicated to the young men of Berea in hope that they may here train their bodies to be swift and enduring servants of good will that they may here learn to play in generous rivalry and cooperation, to face danger without fear, defeat without dismay, victory without conceit...that thus winning the gallant manhood of the pioneers who made their homes in this wilderness and of the patriots who built this College, they may take honorable share in the glorious contest of the Republic and of the Kingdom of God" (Berea Alumnus, 24:5, 1954, 72-74).

During the first year of use a controversy arose regarding the pool, its water purity, student swimmers and whether to use  or not to use  bathing suits and what kind of suits, if any, were appropriate  to wear.  The pool was "a perennial delight" and would be used by all boys who would have a thorough shower before entering and "only clean pure blooded boys would  be  approved by the medical staff" (Berea Citizen, July 26, 1928, 3). Because of the drought in 1931, the pool was not filled and students were not allowed to use the showers in the residence halls. Guards were posted to save water and monitor baths (PAR, 1931, 9). During another drought in 1939-40, the used bathing water was barreled and delivered to residence halls for flushing toilets (Professor Robert Menefee) and basins in the residence hall restrooms had a painted line indicating the amount of water to be used for daily hygiene (Virginia Ferrill Piland). 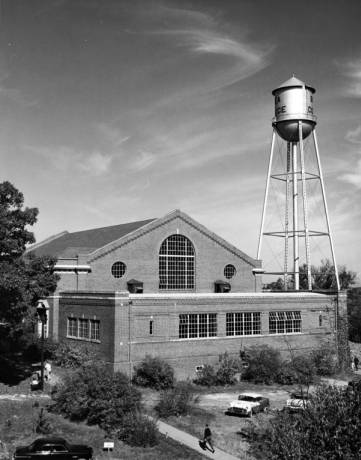 In 1901, the Trustees voted $200 for the construction  of athletic fields north  "just a step down the hill" from Howard Hall. A baseball diamond, a gridiron and bicycle track were built (trees were removed and tile work completed  by student labor and volunteer labor) and a practice diamond was laid out on the ridge beside Howard Hall (Berea  Citizen, March 14  & April 4, 1901). A better baseball diamond was built along the west side of Ellipse Street during the spring of 1948 (BTM, April 16, 1948) and this field was expanded, new spectator stands were built, the diamond was repositioned and re-laid and a press box was built during the  spring of 2003.

Four racket and handball  courts, as a separate  brick building, and an expansion of parking spaces  on the north side of Seabury Gym were added in the summer and late fall of 1978-79. As a building addition, the handball courts, designed by Johnson and Romanowitz of Lexington, added 6,500 square-feet to the complex and together with an improved parking lot, cost roughly   $375,000 (Berea Citizen, May 4, 1978; August 10, 1978, 11). The Seaburys again pledged funds ($100,000)  for  this project. An eight lane all-weather rubberized-surface 400- meter track was initiated in late September, 1983, and was constructed according to National Collegiate Athletic Association specifications. The track was constructed by the Allen Co., Winchester, KY, and the surface was installed by School Craft Construction, Dayton, OH, at a cost of $322,000. Much of the cost was made possible by a gift from Mr. and Mrs. Harry A. Towsley, Aun Arbor,  MI (Berea  Alumnus,  January-February,1982, 19; Berea Citizen, October 8, 1981; August 26, 1982, 13). The oval infield of the track accommodates a steeplechase water jump, high jump, long jump and pole vault area. It was resurfaced  in 1997.
East of this 400-meter track, an eleven court tennis facility with pavilion (1996) was dedicated on October  7, 1995, and named  for Dr. Wilson and Ellen Best Evans, 1930 graduates and former Dean of Labor, Tennis Coach and the Director of the Alumni Association (Berea Citizen, September 28, 1995). Tennis courts had been in this location from early in the century; they were renovated in 1979,  and then  expanded  and improved  in 1995-96. Other tennis courts were once located on the front lawn of Draper Building, in front of Anna Smith and below the President's Home on the women's athletic field. All courts have been removed.

Ground was broken on April  15,1994, for this 64,000 feet expansion and renovation project. The newly consolidated center  (106,996 square feet) has: a natatorium  building with a six-lane 45 feet by 25 meter pool (dedicated to Dr. O. H. Gunlder, retired  head  of Men's  Physical  Education, during the second week  of January,1996);  a fire-proof  forum large enough for two full-size  basketball  courts with seating for more than 2,800 at concerts and commencement ceremonies and  2,000  for  athletic events; a Wellness facility, and Performance Laboratory; a seminar-conference room; new classrooms; an indoor running track of approximately one hundred sixty meters; offices for consolidated Physical Education and Wellness faculty (both men and women's  PE);  new  men's  and women's showers and locker rooms;  and  a parking  lot of one hundred seventy-five spaces. The original building housing the basketball court was stripped and refurbished as an all-purpose large-scale recreation hall. All renovation and construction was completed for the fall term 1995 (Berea Citizen, January 28, 1993; April  14  and 21, 1994).

The concept of a multi-purpose Civic Center was part of President Frost's discussions with the Olmsted Associates in 1910. Ultimately under  the Stephenson's administration, Seabury Complex was built to satisfy Frost's un-built proposal. Today, except for Draper Tower, this newly built and refurbished Seabury Complex is the first major campus building seen when entering the campus from the north superhighway interchange off Walnut Meadow Pike, "the backdoor to the campus," as the Olmsted Associates called it. The structure is a broad unrelieved wall and mass of bricks with a bowed central two-story entrance. This entrance, supported by heavy brick piers, opens out to a front circular drive. The architects used some patterning of bricks, industrial style windows without reveals and limestone dentils and stringcourse (inspired from the original Seabury Gymnasium) as a means to lighten the apparent bulk of the building. Attempts were also made to use other architectural details from the original gymnasium to "connect" the various parts. Plantings and undisturbed  trees along the north wall hide some of the building's mass. However, the campus entrance is below grade and views of the complex from the main campus are better than those from Walnut Meadow Pilce. After many attempts, a public address system has still to be found that will assist in malting this building an acoustically effective building for public gatherings. At this date this is the largest single building on the campus and was the  most expensive construction project  the College had ever undertaken. As of this writing the structure is a very large sports complex, and little else. Yearly commencement exercises are held in the basketball arena, but concerts are an impossibility because of the hard surfaces, reverberating sounds of the heating and cooling systems and generally poor acoustics. 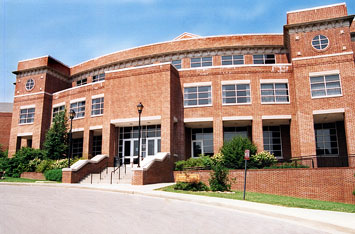