Built by: A. C. Harrington Superintendent of Construction ond Woodwork

The Board of Trustees and President William J. Hutchins felt that mountain people imbued with a profoundly religious spirit, but limited  science exposure, needed to be enlightened  to the "truths of science" and that this new building and the classes to be taught in it would "burn away the ancient barriers between science and religion." It must be remembered that this discussion and construction was taking place at the time of the Scopes "Monkey" Trial in Dayton, TN. Gray drew and presented the plans and specifications to the Board of Trustees in mid November,  1926. However, funds were not available to build the whole building as designed; thus, only two  thirds of the building was built in 1928. Faculty and men from the Normal School helped excavate the site beginning March 9, 1927. In an article in The Architectural Forum (June, 1931) where Berea's Hall Science Building is illustrated, the author states: "It is necessary for the architect to make a study of the growth of the institution, of its policy toward expansion and its probable increase in demand for instruction in the various branches of each group (Biology, Chemistry, Physics, etc...) The closest cooperation of the architect with the faculty is necessary in making the requisite provisions." The science faculty were consulted and assisted in the  design and needs  of the  building.
The south and entrance units of the Hall Science Building were constructed on the west edge of the ravine behind Lincoln Hall and overlooked the College Utilities that were built in that  ravine.These two constructed sections of the Science Building, housing physics, chemistry, geology, biology, astronomy and a common lecture hall seating more than one hundred at tablet arm chairs, was partially planned by science professors Burroughs (Geology), Bangston (Biology), Capps (Chemistry) and Noll (Physics). A plaque reads: "Here Biology, Chemistry, Physics, Geology and Astronomy all dwell together in peace and harmony, bearing silent testimony to the infallibility of the Scriptures" ( Berea Alumnus, April 1931, 11). The religiously  conservative  southern Appalachian region from which the Berea student came was especially  suspicious  of the teaching  of science. However, this was also the year, 1927, that Charles Lindbergh flew solo from New York to Paris and mastered the science of distance flight. Innovations in science and technology were changing the world.

Old-fashioned- Barbourville brick (400,000), Bedford limestone and reinforced concrete make up the whole of the building. A Vermont green slate roof covered the one hundred   twenty-eight by fifry feet structure and an observatory at the top rotated a full 360 degrees ( Berea Citizen, March 17, 1927, l; April 26, 1928, 1). Various College departments and student labor essentially built the structure. Cabinetwork was produced by the College Woodworking Industry but some of the plumbing and electrical work was installed through external contracts. Otherwise, the whole was constructed in-house under the supervision of A. C. Harrington. The central portion incorporated arched windows, adapted Palladian windows, and a classical pediment with a cornice incorporating <lentils, and a limestone string course pulls the whole red brick four-storied  building together. Nobel Prize winner and renowned physicist Robert A. Millikan spoke at the dedication April 28, 1927, and like all the spealcers that day, wove a tapestry unifying and connecting scripture and faith to .the discoveries of science and nature (Berea Citizen, May  3, 1928). 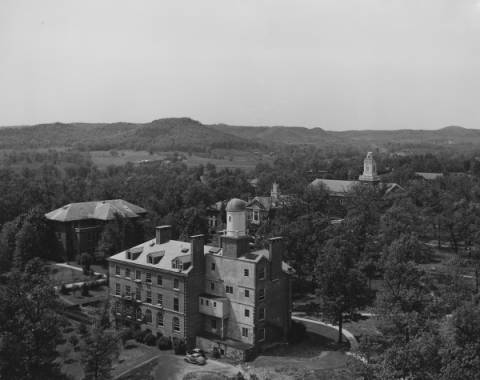 In 1950, College enrollment had increased 141% since 1928, but enrollment in science classes had increased 169%. All students were now required to study physical and biological science. Consequently, the College was in desperate need of classroom and laboratory expansion in the Science Building  (BTM, November 17,1950; April 13, 1951). A gift of $100,000 came from the General Education Board of New York City to assist in the construction of this 373,000  cubic feet addition (1952). An eighty by fifty feet north wing and a forty-six by twenty-four feet east wing were begun in 1953 (Berea Citizen, November 6, 1952, 1) and  completed  in  1954. Twenty-eight years following the completion of the first section, Science Professors Burroughs, Bangson, Capps and Noll again assisted with the planning for this later construction. The new equipment cost approximately $50,000 and Woodcraft Industry built about one­ fonrth of it. The addition was dedicated during ceremonies on April 8-9, 1954, where Charles E. Kettering, inventor and Vice President of General Motors, and Horace Trent and Edward Cooper, both scientists and alumni of Berea College spoke (Berea Citizen,April 1,1954, l; April 8,1954).

In 1953, a greenhouse ($10,000) was given to the College by Donald Kettering and was attached to the south edge of the building. The earlier Edwards Building greenhouse was razed in 1954. The original observatory on the building's central section (1927) was equipped with a new four-inch refractor telescope whose origin remains a mystery. However, this telescope  was replaced  in 1972, with a sixteen-inch Boller and Chivens Cassegrain reflector telescope; at the same time, a poured concrete pillar and pier was constructed to support the weight and the original wooden floor was removed. The new telescope, a gift given in memory of Wilbert J. and Ida S. Austin by their children ( Berea Alumnus, July-August, 1973, 5-7) had been used at the University of Washington, Seattle, WA. A bequest from Eugene Kettering paid for the installation by Barco Construction of Lexington (Berea Citizen, July 27, 1972). The Gustavus Pfeiffer Science Research and Reference Library on the second floor was established from a Peiffer Research Foundation grant ($13,000) and was dedicated May 30,1964 (PAR, 1964). 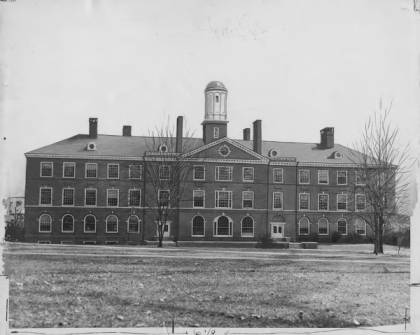 Charles Martin  Hall,  1863-1914,  an  Oberlin College pupil of William G. Frost (class of 1885), invented a technique to produce large quantities of aluminum  by the electrolytic  reduction  process.He was one of the founders of the Aluminum Company of America (ALCOA) and at his death (19H) he  gave Berea  one-sixth  of his estate, 15,000 shares of this company's stock. His estate was not  to come  to the  College  until   1934, though  small amounts were paid annually. "Charles Martin Hall's bequest to the College was of such importance that the College itself, to a large extent, is a memorial to him." The College trustees, recognizing  this  munificence, dedicated the Science Building to him during a ceremony on November  24, 1956 (Berea Citizen, November 22, 1956,1).

For all intents and purposes, Mr. Hall's estate is the foundation of Berea College's considerable endowment. During the time of the construction of this new wing as a completion of the original design and its renaming to honor Charles Hall in 1954, Kentucky House Bill 25, the Day Law, was amended by the Commonwealth of Kentucky and most importantly, the United States Supreme Court ruled that racial segregation in education was in violation of the American Constitution. Berea College under  the leadership  of President  Francis S. Hutchins returned to its founding principle of admitting Black students (PAR, 1949-54). Also in 1954, Americans, and especially persons living in Madison County, KY, became increasingly concerned  about the  disposal  of radioactive waste and learned that  smoking could  be related to increased cases oflung cancer. Ultimately desegregation, radioactive waste and tobacco would have a direct impact on the underlying "culture" of Berea College.

Berea College was constructionmanager and coordinated the schedule

Ground was broken on June 20,  1984, and  the whole of the Hall Science Building was expanded and refurbished  by 1987. This was the largest single capital project  ever undertaken  by the College to that date. The  building  was  divided  and renovation was completed in stages,  beginning with the south stairway in 1984, and the north stairway in 1985; those sections were gutted and construction and renovation begun. Walls were built to seal sections of the building so that some classes could continue to be taught in the building; the mechanical and electrical services had to be maintained at all times during the  construction. Steel studs, gypsum wallboard, ceramic tile, and some marble and terrazzo were used in the renovation. A new elevator with a two thousand pound capacity was installed in the north central part of the building (in the wing constructed in 1953-54). When moms were gutted, new larger rooms were built; e. g. two original rooms became one large room. A new physics laboratory and a planetarium dedicated to retired College President Willis Weatherford, as well as new laboratory equipment were included in the project. A Faucault Pendulum was installed in the front entrance to give a graphic demonstration of the earth's rotation.

Science classes were relocated to different floors than those used in earlier years. Reliant on requisite laboratory equipment, Physics occupies the first floor and the basement; the Geology Museum is on the first floor; Anatomy and Physiology is taught on the first floor; Biology, Zoology and Botany use the second floor; Chemistry is on the third floor and offices are scattered throughout the building so that science faculty members are close to the rooms in which they teach. Laboratory equipment incorporated petstone and labstone, stainless steel and hard maple. A single chemistry work station cost about $50,000. The Weatherford  Planetarium  occupies a two-story space in the southeast  corner of the  new three-story  addition and can be reached  by a  new back entrance that opens to the parking lot; a new greenhouse was attached to this new addition. A student lounge was  created upon  entering the south door  off the Campus  Quadrangle.  During late 1984, funds came from numerous sources: AT&T Foundation; Westmoreland Coal Company and Penn Virginia Corporation Foundation; Parker Hannifin Foundation; Pew Memorial Trusts; Jesse Ball Dupont Religious, Charitable and Educational Fund; and Eastman Kodak's Education Program. Important contemporary scientists, James Burke and Carl Sagan spoke at the rededication ceremonies (Berea Citizen, June 28, 1984; September  24,  1987).