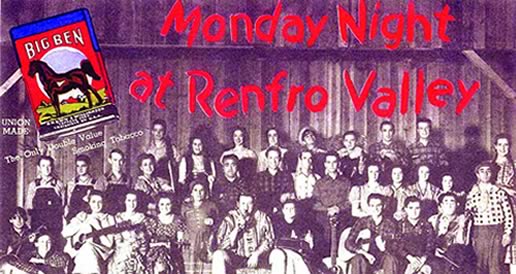 Monday Night at Renfro Valley is the least well known of John Lair’s Kentucky based radio programs, probably because it was on the air only from August 1940 through April 1941. It ran on the NBC Red Network from 8:30 to 9:00 EST, placing it in unlikely competition with such popular Monday evening programs as Amos 'n' Andy, Burns and Allen, The Lone Ranger, and dance bands the likes of Duke Ellington and Hal Kemp.

The program is especially notable for how Lair mixed entertainment with words of comfort and inspiration, attempting to give voice to his listeners’ war anxious thoughts, getting them to donate books to Kentucky’s Pack Horse Library program, and urging their support of the country’s first peacetime military draft, more than a year before Pearl Harbor.

No broadcast recordings of the series have survived, however something of its flavor can be realized by reading Lair’s scripts in combination with listeners written responses to what they heard. Particularly notable overall, is Monday Night’s slower pace in contrast to the boisterous Renfro Valley Barn Dance that had been heard Saturday evenings on Cincinnati’s WLW since 1937. 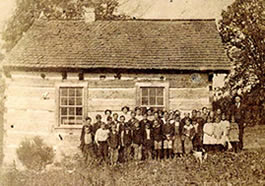 Lair shifted the Monday night action from the Valley’s barn-like auditorium to the restored Red Bud Schoolhouse that during his childhood, had been the scene of political rallies, elections, preaching services, and traveling shows. From this much smaller structure, he and his performers played to unseen listeners before their radios at home instead of the large face-to-face audiences that gathered for the Barn Dance stage shows.

Lair said that on the Monday night program, he was trying to show his listeners “a little glimpse of life down here in the Hill Country, among real folks.” On the first program August 5, 1940, he urged listeners to "please don't think of what you'll hear tonight as a radio program.” Rather, it was a weekly, neighborhood get-together where Valley residents could "talk over old times, air our views on present day happenin's, an’ try to figger out ways to help each other along a road that has always bin a rocky one to travel fer us mountain folks."

He said the program’s British owned sponsor, Brown and Williamson Tobacco Company, saw in the weekly get-togethers “a steadying glimpse of pioneer America” that would help listeners face up to the frightful prospects arising from German war making.

As the program came on the air, discussion of community concerns was portrayed as just ending, thus leaving plenty of time for singing old songs and hearing stories about the real life people and events that inspired their writing. For listeners "shut up in a hot, noisy city” there was also the "music" of the katydids “that lulls us to sleep down here…ever night,” readily heard through one of the school house’s open windows.

Lair refused to refer to the music he featured as “hillbilly.” It was instead, “early American” or “home folks.”

(He said the songs) “tell a story of heroic min er wimmin--true stories of hardships an' perils an' joys an' sorrow that were a part of the every day life of those who made this country what it is. It's part of the great American Tradition--an' we think down here in Renfro Valley that American Traditions are worth keepin' and passin' on to future generations... " One of the purposes in these meetins, right frum the start, wuz to try to teach you young folks to appreciate songs with a soul to ‘em." 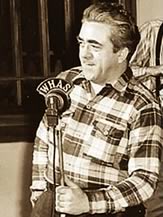 In his stories about the songs he told of both Black and white songwriters, ex-slaves “fightin' fer a place in the economic set-up," pioneers, cowboys, gold miners, outlaws, and U.S. presidents. Oft repeated themes were the value of hard work, the necessity of patriotic sacrifice, and the nurture provided by home, school, and church, He was particularly concerned that these stories would help foster among young people in the audience a “finer appreciation of the hardships an’ joys of a pioneer generation” …making them see that “America and American Ways were too dearly bought to be easily given away.”

He heightened the program’s nostalgia value further by combining songs and narrative to recreate such days-gone-by, labor-sharing and social events as a corn shucking, candy pulling, apple cutting, quilting bee, and bean stringing. Particularly ambitious would be remote broadcasts from the scenes of an actual possum hunt, fish fry, and hayride.

Beyond the program’s entertainment and inspirational aspects, its commercial mission was critically important for attracting more paying customers to Lair’s music oriented tourist complex that he had opened ten months previously in 1939. Although WLW's broadcasts of The Barn Dance were generating considerable visitor traffic, income was not yet sufficient to repay his startup borrowings and clear a healthy profit.

Signing on to boost sails of Brown and Williamson’s newly introduced Big Ben Pipe and Cigarette Tobacco meant both money to pay performers and exposure of the Renfro Valley name and personalities on twelve additional NBC stations scattered across the south and west. WLW and stations in Atlanta, Dallas, Tulsa, and San Antonio, were 50,000-watt operations, a feature that ensured wide-ranging, interference-free nighttime coverage.

Surviving listener mail from twenty of the thirty-six states Lair heard from provides strong clues regarding audience demographics. Although the sponsor decided that not enough listeners were being attracted to warrant continuing the series another season, the mail suggests that the program’s rural setting, folksy format, and Lair’s vision of a “steadying glimpse of pioneer America” weren’t without commercial promise. 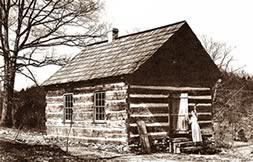 Vindication for Lair’s Monday Night approach came in 1943 in the form of a Sunday morning program on CBS for Louisville's Ballard Mills, makers of Ballard's Obelisk Flour, a popular household staple across the south. The setting remained a weekly, neighborhood meeting in the Red Bud Schoolhouse with old songs, reminiscences of days gone by, and uplifting words for harrowing times. Only the name was changed to simply the Renfro Valley Gatherin'.

This revival of Lair’s Monday Night type program enjoyed wide popularity, staying on network radio well into the 1950s. Early in the 2000s, it continues on many independent stations as a promotional feature for the present day Renfro Valley organization.