Frederick Louis integrated the running bond red brick and limestone of the historic Georgian campus in a contemporary fashion with his symmetrical design and concrete-aggregate half- columns incorporated on the main facade. Into the east facade that was divided into three parts, he incorporated segmented arches that were in-ﬁlled with ﬂoor to arch insulated tinted glass. His whole horizontal composition of reinforced concrete frame was raised on a platform of concrete planters, slate ﬂoors, a ﬂat roof and a string course of soldier bond brick. The indented entrance doors were placed between two units consisting of six arched bays. Construction and placement of the Hutchins Library completed the quadrangle of earlier buildings without detracting from those buildings not calling attention to its more contemporary vocabulary. 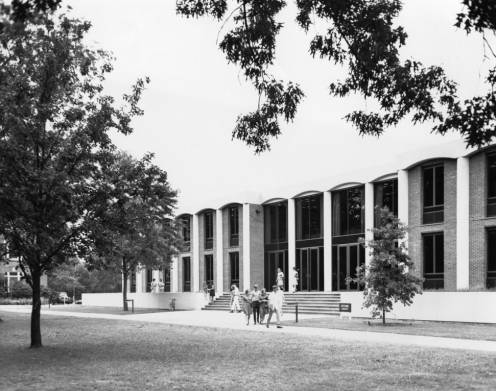 The library cornerstone was laid May 26, 1966. President Francis Hutchins described a college library as the “beating pulsating heart of the educational institution” and English Professor Thomas Kreider described the faculty “as guides of students” Who promoted critical thinking and intellectual honesty (Berea Citizen, June 2, 1966, 1). The building was dedicated on October 25 and 26, 1966 to Presidents William James (1920-39) and Francis Stephenson Hutchins (1940-66) who together served the College for forty-seven years. Dr. Robert M. Hutchins, son and brother of the Library namesakes and former President and Chancellor of the University of Chicago (1929-1951) spoke at the dedication ceremonies (Berea Citizen, November 3, 1966). The cornerstone contains among other things: a Bible, a Berea College Catalog, an Alumnus, the Pinnacle, a campus map, a copy of the Berea Citizen, a Louisville Courier- Journal and a speech given by President Francis Hutchins (Berea Citizen, June 2, 1966, 1). The library opened for use during March 1967. The three story building had 72,000 square feet of space and open stacks to shelve 300,000 books and 1,300 periodicals. When it C opened, the Library contained 160,000 books and 800 current periodicals and thus, had space to grow. Much of the building was furnished with tables and chairs provided by Knoll Associates and Herman Miller, Inc., but were designed by important contemporary American designers: Charles Eames, Eero Saarinen and Harry Bertoia. With the 1990 building renovations, much of this ﬁne furniture was moved for use to the Art Buildings.

During this year when the library was being readied for its opening and dedication, United States’ spacecraft made soft landings on the moon, race riots broke out in major American cities, students rioted against the Spanish Government and American citizens protested the Vietnam War. This was a period of civil unrest. However, on the Berea Campus, for those students who qualiﬁed, wages were raised because the College was now accepting monies from the Federal Government to assist in lowering student costs. The author’s student wage of seventeen cents an hour, jumped to more than ﬁfty cents. Far more low-interest loans for students from low-income families were now made available. The Foundation School Library of over 5,000 books was moved to the Hutchins Library during the spring of 1971 and the remaining books were given to both Pine Mountain Settlement School and the Berea Community School. Funds to build the Hutchins Library were provided by twenty- eight foundations and corporations and ﬁfty-nine individuals. Huge donations came from Mr. and Mrs. Morgan Cowperthwaite, Charles Dana, the Dana Foundation and the Ford Foundation (Berea Citizen, October 20, 1966, 1). When Francis Hutchins became President in 1939, the College had 860 college students and sixty-nine faculty members, but upon retirement in 1966, 1,460 college students were enrolled with 136 faculty members. 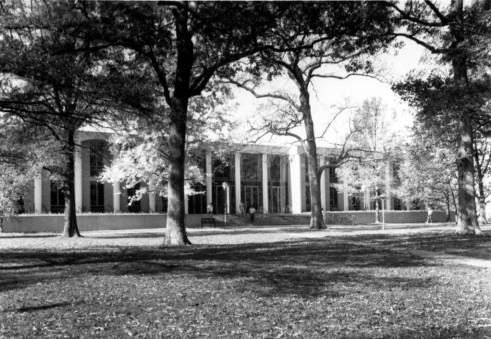 During the fall of 1988, College Trustees approved a 30,000 feet expansion to accommodate the College’s Computer Center, Special Collections, laboratories, classrooms, study areas, carrels, new stacks, acoustical improvements and a new roof (Berea Alumnus, Winter 1990, 4-5). A Kresge Challenge Grant of $750,000 and an Ashland Oil Foundation grant for $270,000 were two of the major sources of funding used to pay for this expansion construction. Ground was broken on March 17, 1990; the building Was opened for use during the fall of 1991; and dedication took place, January 24, 1992. Graduate (1942), trustee, former United States Secretary of Commerce and Keynote speaker, Juanita Morris Kreps said the 96,000 square feet “building symbolized more than a century of growth in Berea’s intellectual capacity” (Berea Alumnus, Spring 1992, 21-22; Berea Citizen, August 30, 1990; November 22, 1990; January 30, 1992, June 11, 1992).

Today, the Computer Center and Media Services occupies 10,000 square feet of space; but the new addition also houses on the top ﬂoor new carrels and more stacks for the library holdings, and below ground, the College’s Special Collection/ Archives which is made up of: the Weatherford- Hammond Mountain Collection, papers of the Council of the Southern Mountains, materials related to Appalachian Volunteers, papers and microﬁlm of ten Settlement Schools, the Southern Appalachian Archives, the John A. Shedd Memorial Lincoln Collection, college presidential papers and a Curio Collection. This new wing has an indented asymmetrical two story east facade, though the structure is actually four stories high on the back. Several bands of soldier bond brick are used but no engaged half—columns were attached as in architect Louis’ design. Instead concrete aggregate segmented arches and lintels are used at the entranceway. Windows were added to the lower facade during the spring of 2005. 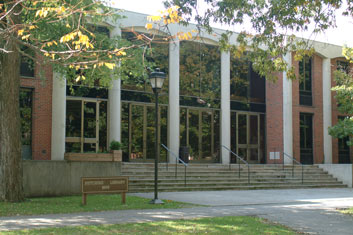