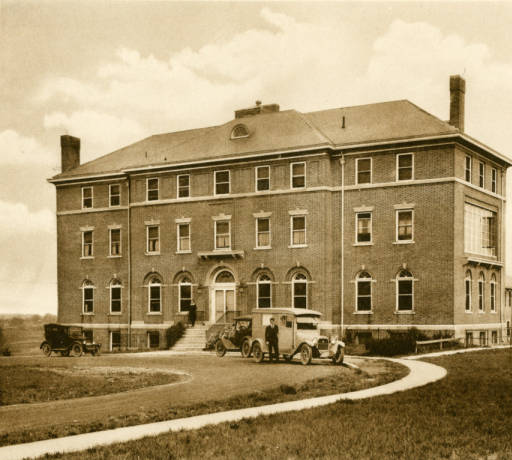 In 1916, President Frost and the College Trustees again asked architect Cleveland Cady to design a new facility which was to be built away from the '" center of campus life. Ultimately it was constructed on the campus with the densest student population (Foundation and Vocational Schools). A site on the edge of the ridge, "without going over the declivity of the ridge," just north of the old Richmond Pike and northeast of the First Baptist Church was chosen. The site took advantage of winds and air (Frost letter, July 15, 1916). A rear wing was built first and contained an operating room, an office, a bath and three patient rooms (Berea Quarterly, October, 1915; PCM, August 12, 1916). This new square Flemish bond red brick, three-story building which began in 1917, and opened for use on January 1, 1918 (PAR, June, 1918), was partially made possible by a $6,000 gift from Mrs. Henry S. Grew, NY. Cady used large indented arches with limestone keystones and a limestone string-course to articulate the lower facade; and between the third floor windows, he used blank recessed rectangular units. The symmetrically placed main entrance was placed inside an indented arch and the whole structure was built on a raised basement floor. When the hospital opened for use in January, 1918, a ward patient would spend $6 a week and an obstetric patient $5 a week (Berea Citizen, January 17, 1918, 3). The south second floor of the Grew Hospital had a large window-walled sun parlor. In the modern, up-to-date and efficient plans the architect provided hydrotherapy, kitchens, baths, a fully equipped operating room, and enough rooms for a capacity of 50-60 beds (Berea Citizen, January 17, 1918, 3). The College's Prudential Committee authorized the purchase of furnishings in April, 1917. When the Grew Hospital opened two doctors and two nurses with numerous girls in training ran the facility that was open to and available for the whole community, not just the campus (Berea Citizen, September 11, 1918). Nineteen cases of spinal meningitis, Berea's first major epidemic, were confirmed only weeks after the new building opened in January. In 1924, Dr. Cowley had as his assistants Lorena Hafer (Superintendent) and Florence Gibson (Nursing Assistant) who worked with him until 1933 and 1934. Dr. John W. Armstrong joined the staff in 1927, and became Hospital superintendent in 1943.