By 1937, this adjunct "plant" to the College agricultural program covered eleven acres, had four buildings,  six brooder houses,  and an incubator house. In 1937, the poultry  farm averaged 131 eggs a year from each hen. Bulk eggs were sold to the Boarding Hall, College Hospital and the College Store (PAR, June 1937; Berea Alumnus,  7:7,  1937,  205-209+ ).  In 1958, 100 acres and six new buildings provided the capacity for 7,000 baby chicks, over a thousand laying hens and a flock of turkeys. The Poultry industry was shut down in the 1980s and the barns have been used for College surplus storage and as a home for the College  Utilities. 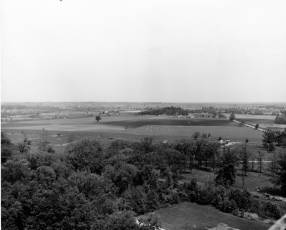 By the mid 1930s, the College farm was producing 70-80 bushels of corn an acre; but by 1958, 100 bushels per acre could be expected; a swine herd was  begun  in 1920,  a flock of sheep in 1922,  and a beef cattle herd in 1929. By 1958, the livestock farm located on the north side of the College had grown to nearly 700 acres, had a 200 ton silo, pig parlors (these were torn down to make room  for the new Berea Community School in May, 1969), feeding barns, storage buildings and implement sheds. Most of the farm properties extended north and south of the ridge. Greenhouses were  built below the Cannery during 1958 and were used to provide production space for vegetables, flowers and ornamental cuttings to improve the appearance of the campus ( Berea Alumnus, April 1958, 5-12). These greenhouses were refurbished during the early months  of 1975. In 1983,  a mix mill  and hog feeding floor, and in  1995,  a hog farrowing house were built at the north farm. By the latter part of the twentieth century, the Department of Agriculture was graduating students mostly in Agriculture  Business,  not pure  agriculture  as had seen the case in the early part of the century.