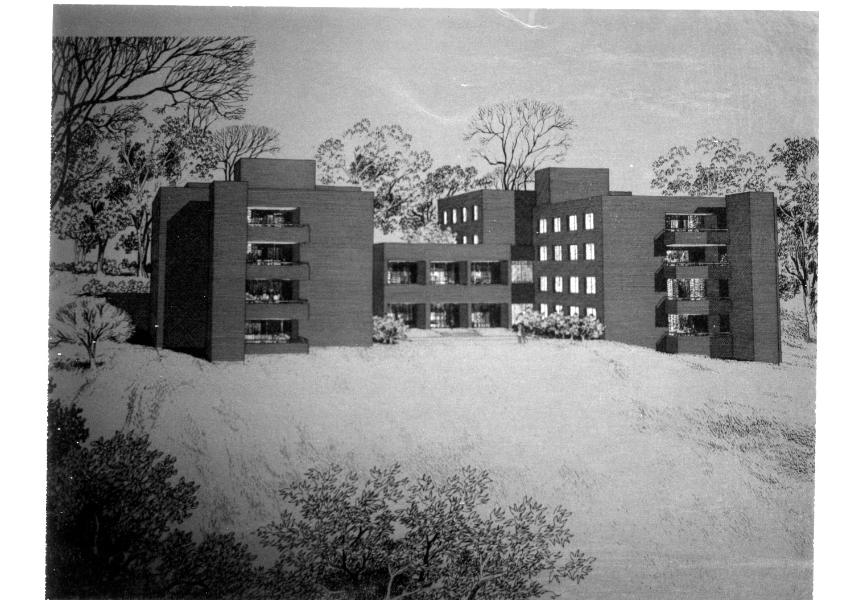 Architects: Hellmuth, Obata, Kassabaum, St. Louis
Construction: Lane-Hargett, Company, Lexington, KY
Ground Broken: November 4, 1969
Cost:  $1,085,000
This residence was named for Donald Danforth, Sr., Vice  Chairman  of the  Board  of Trustees and Chair of the Trustees' Development Committee, who served the College for twenty-eight years on the Board and "had an enormous role in the Great Commitments Program ($35 million capital funds campaign)." However, when ground was broken, the name of the residence hall had not yet been selected (Berea Citizen, November 6, 1969). A third generation Danforth, his son, Donald Danforth, Jr. was elected  to the Board in  1973 (Berea Citizen, November 4, 1971): Another College  donor,  the  Kresge  Foundation gave $25,000 for construction. This residence as composed  of suites of twelve students m eight rooms  clustered  around a study and social lounge as was its sister residence hall, Kettering which was  built at the same time. For all practical purposes  the same plans were used for both.  [See style discussion  of Kettering.]  When  Danforth was being constructed, Neil Armstrong, American astronaut, became the first human to walk on the moon.

During the early Presidency of Larry Shinn and before 9/11 and the fall of the stock market, the College Board of Trustees voted to renovate a number of residence halls during a ten year time span 1995-2004 (Fairchild, Danforth, Kettering, Theme Homes, Blue Ridge Systems, Married Student Housing, Kentucky, and Talcott). During this same time period eleven academic buildings were also renovated or constructed (Edwards, Seabury Center, Frost,Woods-Penniman/Crossroads Complex, Phelps Stokes, the Appalachian Center, Bruce Trades, Draper, Dimitrie Berea Gallery, Presser, Child Development Laboratory, Lincoln and Public Relations into the Appalachian Museum). All new construction was environmentally friendly, used four inches of insulation in the walls and at least six in the ceilings. In the sequence of buildings, Danforth Men's residence was one of the first residence halls to be renovated using ten member student labor crews. Since the 1970s, student labor crews assisted with summer construction and renovation projects. The following year, Kettering Women's Residence Hall was renovated in the same fashion as Danforth. Bathrooms were gutted and rebuilt, new kitchen units were installed, and smoke detectors, fire alarms, and computer ports were added. (See the more detailed renovation description of Kettering Hall.) [An author's aside:Frost's and Hutchins' periods of construction were built to last, but as with contemporary house building, modern construction seems to be built for a maximum of thirty years: "taste and style rule", not quality construction. The structural armature should withstand the wear and tear of many student generations, but the surfaces will not.]