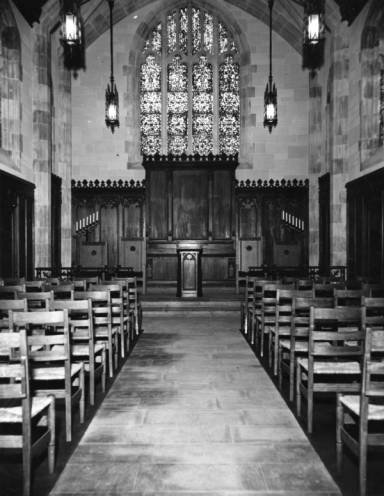 Charles Cellarius proposed the chapel be in a “Colonial Style” but the donor William H. Danforth (an Episcopalian, founder of the Ralston Purina Company of which he was president from 1893 to 1932 and chairman of the Berea College Board of Trustees until 1956) would not be convinced that such a chapel could have “that quiet and reverent atmosphere that we want” (WJ Hutchins letter, March 1936). Numerous proposed style renderings of the chapel were drawn by Jamieson and Spearl and can be found in the College Archives. An English Gothic style was selected. This Flemish bond red brick and limestone English Gothic designed chapel was a building “dedicated to the Worship of God With the prayer that here in communion with the Highest the youth of Berea may acquire the spiritual power to aspire nobly, adventure daringly, and serve humbly.” (This dedication statement was engraved into the left wail of the narthex.) Like the center tine of a fork, the Chapel was to be ﬂanked by the Wings of the new classroom building, Cellarius’ Jessie Preston Draper Memorial, and thus, unite academics and religion (Berea Citizen, May 26, 1938; June 2, 1938). The Reverend Truman Douglas, St. Louis friend of Danforth, conducted the dedicatory services on May 29, 1938. In accepting the chapel, President William Hutchins said it would be a “shrine before which knights of God would dedicate themselves to the nobler battles of the long crusade” (Berea Citizen, June 2, 1938, 5).

For the design of the chapel, Jamieson and Spearl used equilateral, lancet and Tudor arches, a limestone molding with carved quatrefoils to support the gutters and rooﬂine, and brick buttresses capped with limestone pinnacles along the exterior side walls. Parapets surround the roof of the Fireside Room and that of the Campus Ministries. Brick walls rest on limestone moldings and owls, eagles, lions’ heads, grapes, books, scrolls, ﬂowers and human heads are carved into the limestone moldings at the windows and doors. Willet Stained Glass Company of Philadelphia, PA, designed the large stained glass windows. The three exterior walls are embedded with ﬁfty-four stones that came from all around the world and had been collected by Danforth or given to him by friends: “one sent by ex-President Herbert Hoover, one from the top of Pike’s Peak, a slab of marble with an inscription for Berea from the Mayor of Berea, Greece, one from the ﬁrst tomb of Lincoln, one from the Washington Monument, one from the Panama Canal where Balboa ﬁrst saw the Paciﬁc, etc...” (Berea Alumnus, 8:2, 1937, 44-45; BCAVF, 5.39). “Each stone represents a person or place which speaks of victories... many of them religious...won by men and women who dared” (Berea Alumnus, March-April 1977, 4-5). The M P. Moller Organ Company of Hagerstown, MD, built the organ for the wooden balcony that is above the entrance to the chapel. On October 10 1937, the cornerstone was laid and on May 29, 1938, the chapel was dedicated. 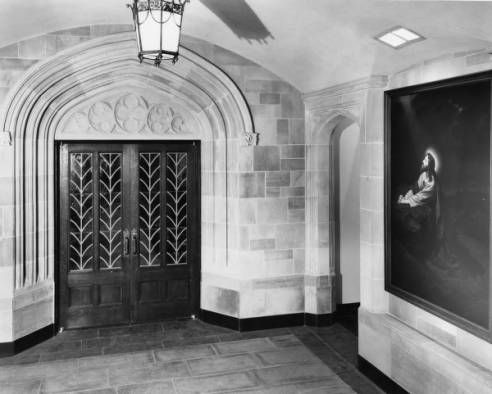 Walnut-stained quartersawed oak was used for the wainscoting, altar,’ reredos, trim and beams in the interior; the upper walls are of smoothly cut Indiana limestone. A Wooden ﬂeur-de-lis molding hides lighting at the cusp of the Tudor arch-vaulted ceiling. Ventilation vents are located in the baseboards and at the Window lintels. The cool, peaceful and sacred space was furnished with chairs built by student workers in Woodcraft. Their signatures can be found burned into the backs of the chairs underneath the hymnal racks. Quostavino acoustical vaults help to deaden noises. The Wrought iron chandeliers were made in St. Louis (Berea Citizen, June 2, 1938, 1+) and the cross and candlesticks were given to the chapel by business associates of William H. Danforth (PCM, July 13, 1938; letter to WJH)  Danforth Chapel has served as a quiet space for meditation away from hectic daily schedules, and for hundreds of weddings (the author’s parents-1939, and he and his wife-1968, were married in this Chapel), concerts, memorial services and for corporate worship. Rooms off the west wail were originally to be used by visiting preachers but have functioned during more recent times as ofﬁces for campus ministers.

The Fireside Room incorporates walnut-stained oak wainscoting, rough cast White walls, bas-relief pilasters alongside the Windows and a large limestone ﬁreplace and mantel. This room continues to be used for receptions and small group gatherings. All the furniture for the Fireside Room was made by Woodcraft and the plantings of rhododendrons and other shrubbery were native to the Berea forest lands (Berea Citizen, June 2, 1938, 5). A reproduction-of Heinrich Hofmann’s (German, 1824-1911) “Christ in the Garden of Gethsemane” was painted by Gilbert A. Rose and was hung at the right of the chapel narthex. Numerous “Danforth Chapels” are scattered around campuses in the United States: e.g. the University of Iowa, the University of Kansas, Pilgrim Church in St. Louis, Missouri, and one at the American Youth Foundation Camp in Michigan can serve as I examples of William H. Danforth’s generosity. A major cleaning and renovation took place at the same time Draper Building was renovated (2002). New furnishings were purchased for the Fireside Room and new plantings and quiet gardens on the east and west of the Chapel were designed and planted by College Grounds workers. 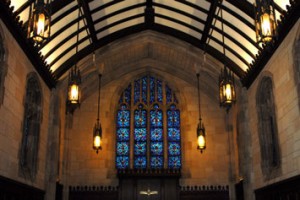