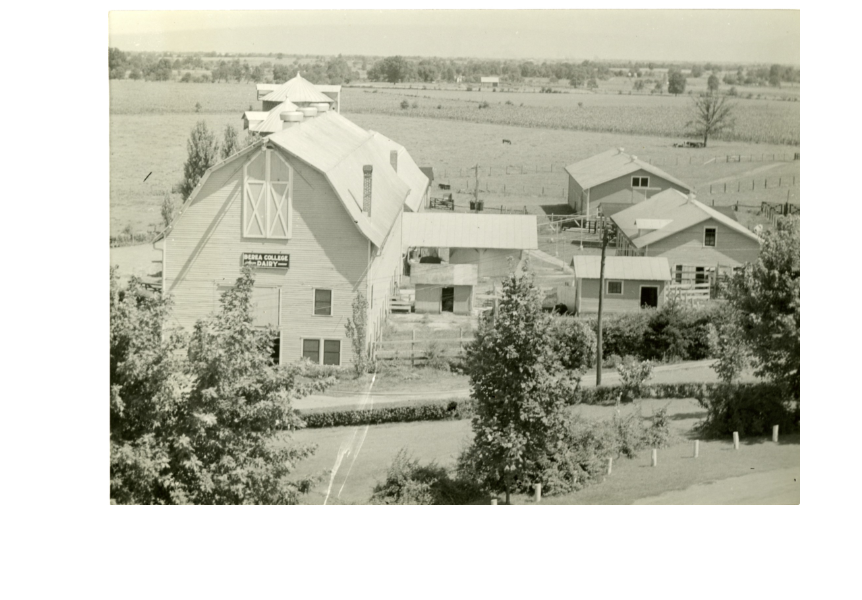 A dairy herd was begun in 1896 and was housed in a dairy barn built perpendicular to Walnut Meadow Pike in 1900. After a fire destroyed the structure a new and better barn (capacity for thirty-six cows) was built parallel to the Pike during July, 1911. A barn warming took place on Saturday, October  21 (PCM, June 24, October 19, 1911). To make the barn safer from fires, the structure was expanded with brick walls  (PCM, May 30, 1918). The College's dairy herd was improved by the purchase of purebred Holstein cows and a mature breeding bull acquired in Wisconsin in 1918. With this better herd and the continued  need  for financial stability of this College industry, a new barn and a cheese factory were authorized to be fully operational by 1918 (BTM,  March  5, 1918; PCM,  June  21 and  July 12, 1918). The dairy sold 33,000 gallons of milk to the Boarding Hall in 1923 (PAR, 1923). By 1925, the herd was virtually purebred; in 1928 the herd was placed on the Herd Improvement Registry; in 1936, the dairy was the best milk­ producing herd in the Commonwealth  of Kentucky; and in 1938 Berea College "had the highest producing herd on twice-a-day milking in the United States (PAR, June 1938). However, to increase butter fat content, a Guernsey herd was purchased in 1932. In 1947, the Agricultural Department entered a few of the herd-cows in the Kentucky State .Fair where the Grand Champion Guernsey in the state was awarded to a Berea College cow (BTM, November 21, 1947). A brick shed and a storage building were built in 1949, and because of the continually increasing size of the dairy herd, a series of pole-type loafing barns were built during 1957. A new milking parlor was constructed in 1958. Berea College, however, went out of the milk producing business  during August 1970, when the dairy herd was sold ( Berea Citizen, September 10, 1970). John C. Campbell Folk School bought the most important cows of that herd.