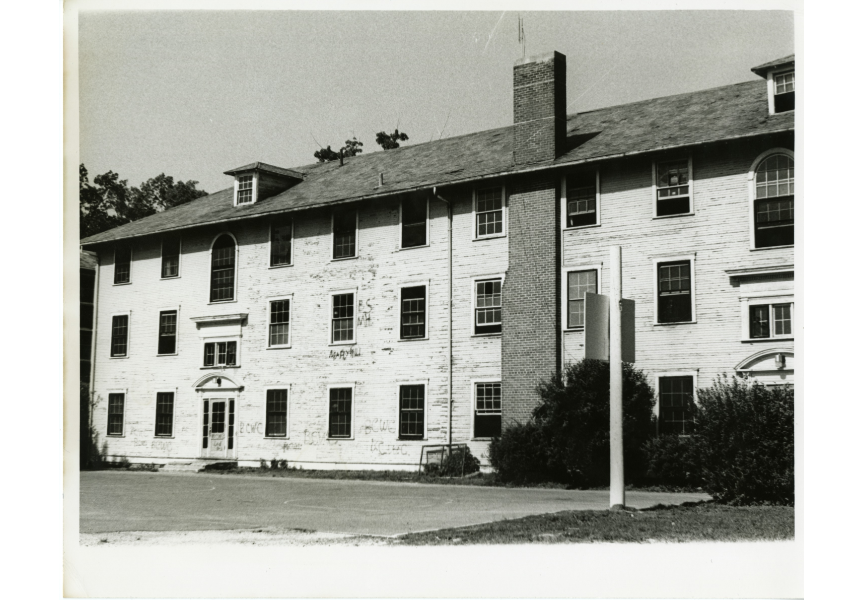 Cumberland, a wooden replica of Blue Ridge, was built in nine weeks and "made habitable" for eighty-five men as an emergency residential structure. On August 12, 1916, the Prudential Committee voted to begin  construction; work began on October 24, 1916; and the Foundation School men's hall was ready for occupancy during the Winter Term, January, 1917 (PCM, October 26, 1916). President Frost sent a hand drawn map and reported to the Olmsted Associates that "out on. . . Dixie Highway (Estill Street), we have located a new hospital and two boys' dormitories . . . [with] a large expanse on which to develop an athletic field" (March 13, 1918). One of these dormitories was Cumberland Hall whose wooden clapboarded construction was one hundred twenty-four by thirty-nine feet, rose three stories above the basement, and stood in alignment forty­ five feet north of Blue Ridge and parallel to the College Hospital. Cumberland was a structure symmetrically designed around a large chimney and two entrances with classical aspirations (pediments, entablatures, and third-story arched windows) and stair halls. At first a boiler was purchased to heat the building but later College steam heat was piped in from the central campus boilers. The boys ate their meals at the Boarding

Hall of Talcott and Kentucky Halls and in April, 1917, the Foundation School boys were compensated a dollar for their inconvenience when they had to move out so that the walls and ceilings could be plastered (PCM, April 12, 1917; BCABG 5.39). During the fall term 1918, Cumberland Hall served as a ward for over on hundred influenza patients. In the 1930s Cumberland housed College male students and Roy Walters was teacher-in-charge. The "Pink Palace" was used until May, 1971, and was razed during that summer as were many other wooden Campus residences ( Berea Citizen, June 17, 1971, 7).