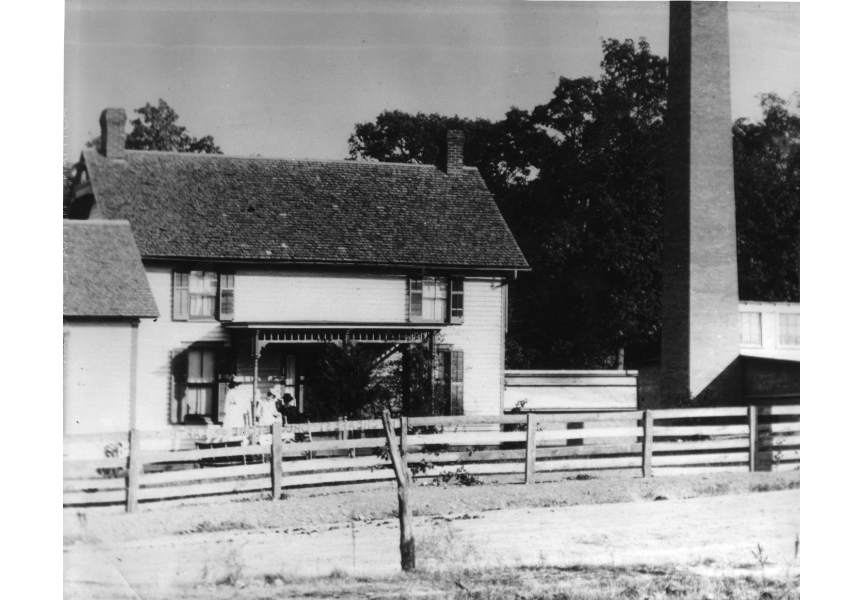 898), was built by the College at a cost of $626 north of the Industrial Building (Edwards) on Main Street. The house stood diagonally from the site where the Hafer-Gibson Nursing Building stands today. Double Cottage had a spindle post porch, shuttered windows, two end chimneys, a basement and spindle decorated trim at the gable ends. It also had double-decker beds for eight patients (Berea QJtarterly, May, 1900, 17). Miss Florence Merrow, trained at Kings County Hospital in Brooklyn, was appointed Director of the Berea General Hospital and Training School for Nurses in 1899 (BTM, May 31, 1899). This hospital also served as an apartment for

Miss Merrow and four apprentice nurses. On January 12, 1912, this hospital building burned (Frost Diary). Miss Merrow "was to be business manager, director of admission and discharge of patients, matron, instructor of nursing and ward management, dietitian, ... teacher of hygiene and head nurse." Miss Merrow left Berea in 1900 (Peck and Pride, Nurses in Time, 7). For the next few years, new nurse superintendents arrived every year and left after only a year's exhausting work. 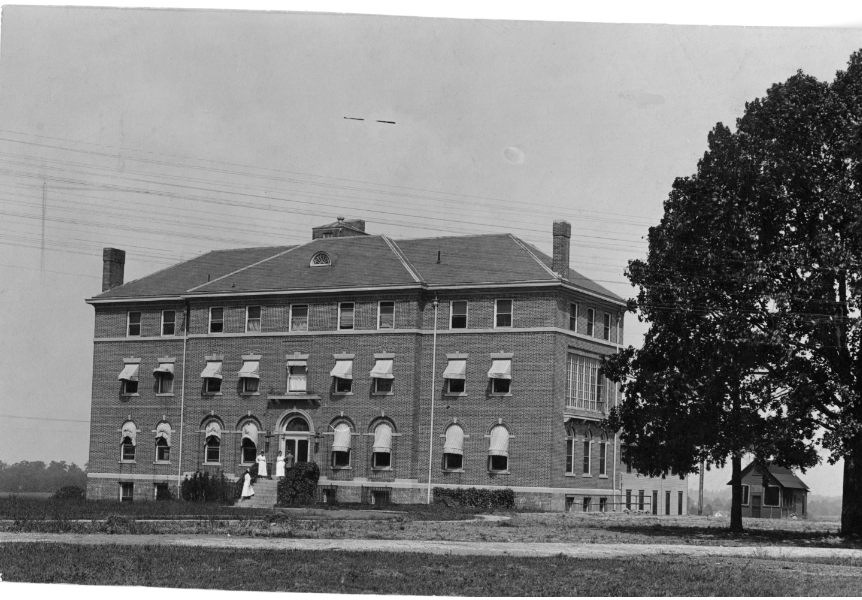 Cleveland Cady, who designed the Metropolitan Opera House and the American Museum of Natural History in New York City, and fifteen buildings for Yale University, drew the plans for Morningside Hospital in 1905. In 1906, President Frost secured funds ($500 from Olivia Phelps Stokes) and approval to build the new facility on the Academy campus on what is now the site of Seabury Women's Residence Hall. Built of wood frame and brick, the two-section, asymmetrical two-story flat roofed "Morningside Hospital" was constructed in 1909 and cost $12,000. The twostory brick section housed a nurse's room, baths, an operating room, office and waiting room, a pharmacy for the doctor, and a kitchen as well as patients' rooms. The wooden annex was used for non-contagious patients. Together the two sections housed fifty-two patients. From 1919 until 1933, Morningside "Cottage", served as a dormitory for thirty-seven Academy and Normal girls and four teachers (BQ, April 1908, 2). After a fire in December, 1953, it was razed during June 1954, and Seabury Women's Residence was built (Berea Citizen, June 24, 1954, 10; November 22, 1956, 1).

Dr. Albert F. Cornelius, Berea's first medical doctor, was on call for students and staff patients when he arrived on campus in 1899. He worked in Berea until his retirement in 1941 (PCM, September 15, 1916). In 1904, Dr. Robert H. Cowley, an Oberlin graduate, was appointed College Physician, Professor of Hygiene and Physiology and Superintendent of the Hospital and Gymnasium "with a salary of $1,500 a year [but would] have no share in the fees" (BTM, June 9, 1916). In 1916, a three-year program of nursing was begun with Miss Jane Durham Pierson as Head Nurse; by 1919, three full time doctors worked at the hospital; and by 1921, a state registered nursing course was established (Berea Alumnus,June 1933, 24-25.)

The wooden clap-boarded Baptist Church had been built in 1897 facing north on Richmond Pilce at the corner of the original Estill Street, on a two-lot site which the College sold to the congregation for $25 (PCM, June 24, 1987). When the new Estill Street was being built and Richmond Pike being closed and absorbed into the Vocational campus, this church house was purchased by the College for $10,000 (PCM, May 10, 1915), and deconstructed. Part of the lumber was reused to construct a contagion ward north of the hospital during the spring of 1918 (PCM, January and March, 1918). It housed seventy-five patients. Construction of the contagion ward was partly due to the meningitis epidemic in January, 1918. Purchase and deconstruction of the Baptist Church had a lot to do with the straightening of Estill Street and the subsequent concentration of the Vocational Campus as proposed in the Olmsted campus plan. The College gave the congregation of the Baptist Church a lot with a 125 feet frontage on Chestnut Street on which to build a new church (PCM, December 14, 1909). This new church was dedicated July 30, 1916 (Frost Diary).

A new wing, the Charles T. Ballard, Jr. and the Munger Memorial Clinic costing $65,000, was paid for by a bequest of Henry C. Munger and gifts from Mrs. Charles T. Ballard to honor her husband. Built in the depths of the American Depression, it was dedicated on November 11, 1932, Armistice Day. The Clinic had three stories: the ground floor housed the garage, X-Ray room and kitchen; the second floor housed the waiting room, Ballard Clinic service room, library, Doctors' offices and Dentist's office; and the third floor served as the operating room and for obstetrics patients. At the time the Munger Clinic was built the original Grew Hospital was refurbished and remodeled with rooms assuming new uses; small rooms were enlarged for lectures, the kitchens were improved and a new Practical Nursing Lab was created (Berea Citizen, November 17, 1932, 1). The Munger clinic was designed with a flat roof and limestone cornice; the building was symmetrical with a fan lit central arched entranceway. This entrance projected from the main architectural block of the clinic and was crowned with a wrought iron railing. Dressed limestone was used to pick out various elements around both the windows and doorway. Berea College gave the Grew Hospital, Munger Clinic addition and the property to the town of Berea in 1952, as a non-profit organization that "would operate without discrimination". Perhaps it is not surprising that the ten-member Board of Trustees of the Hospital was in the hands of the College and the chair was the College President. The whole was now to be known as the Berea Hospital, Incorporated. Articles of Incorporation were published by the Berea Citizen on April 8, 1954, and the same month bids for a new wing were opened on April 28, 1954 (Berea Citizen, April 8, 1954). The top floor of the Munger Clinic continues to serve as the College Health Service. It was renovated in 1990. 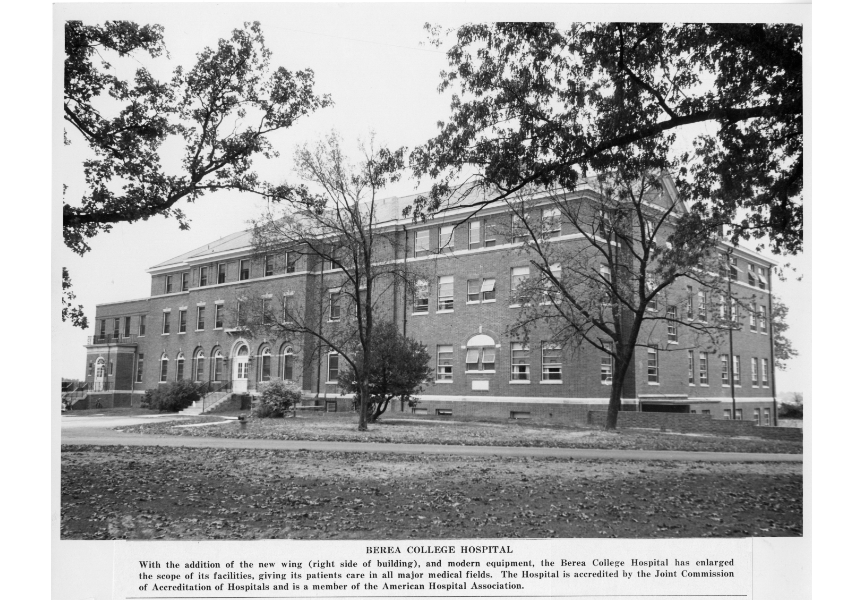 An addition and improvements were added during 1954-56 costing about $826,242 (Berea Citizen, August 11; September 22, 1955). The wood framed Contagion Ward was razed to make room for this addition. Much of the funding, $375,000, came from Federal sources (Hill-Burton Act) and from the Kentucky Department of Health. The College and community raised the additional funds. It- Plans and specifications were approved by both the Kentucky State Department' of Health and the Federal authorities during the summer of 1953 (BTM, April 17, 1953). The School of Nursing was to be enlarged, and the Administration offices were to be brought together in this addition that extended at the back of the building. This new three-story common bond red brick addition contained eighteen rooms with two beds in each, an obstetrical and nursery facility and six private rooms. A new kitchen, dining room, X-ray, central storage and laboratory were housed in the basement and various rooms and equipment were dedicated memorials. The rest of the Hospital was now equipped with piped-in oxygen, a call system, a sprinkler system and all new beds (Berea Citizen, January 29, 1953, 1; April 8, 1954, 6; September 22, 1955, 1). A small chapel was a gift from William H. Danforth, College Trustee. In 1956, the Ford Foundation gave a grant designated for improvements in equipment. This new wing was dedicated November 25, 1956 (Berea Citizen, November 22, 1956, 1). Berea Hospital, Lawson Hamilton Wing, 1969-70 Architects: Nolan and Nolan, Inc., Louisville, KY Contractors: Lumber and Supply, Lexington, KY Ground Broken on August 30, 19 69 Dedication: October 25, 1970 Cost: $830,000 Twenty-one new rooms with a capacity of thirtyseven persons were added to the hospital in 1970 as a skilled nursing extended-care facility. Now owned and operated by the City of Berea and a hospital board, the Board voted this extension during February, 1968, and signed the contract to begin construction in July, 1969 (Berea Citizen, February 22, 1968; July 17, 1969). This new wing was an extension to the 1956 structure. In addition, rooms for physical therapy, dining, offices and pharmacy were included in the new construction (Berea Citizen, May 28, 1970, February 18, 1982). Various rooms were named in honor of Dr. John Armstrong, Dr. John Baker, Margaret Dizney, RN, Dr. Robert Cowley, Raymond Drukker and John Buda (Berea Citizen, October 29, 1970, 9). Funds came from the Appalachian Fund ($100,000 grant)., the Berea Hospital Development Fund, Federal sources ($368,000 from the Hill-Burton Fund) and local industries. David E. Burgio became Hospital Administrator in 1973.

This 40,000 square-feet expansion contained thirty-eight patient rooms, an intensive care unit, an enlarged surgical unit, clinical laboratory, radiology departments, and emergency room and modernized patient accommodations (Berea Citizen, December 15, 1983, 1 & 13). Ground was broken on August 27, 1982, for this expanded facility. This new extension was paid for by a bond issue and in the end cost $8.7 million (Berea Citizen, March 12, 1982, 1). This new addition used Flemish bond red brick in the upper floors but a running bond on the ground level. All windows have limestone lintels and the whole is wrapped with limestone string-courses at the fourth floor windows. The entrance facade is articulated with a wide arch and brick quoinscapped with Doric capitals.

This brick and flat roofed large addition houses the new main entrance, emergency rooms, pharmacy, a small chapel, patient rooms, outpatient services and physicians' offices. After landscaping and new parking facilities, this expansion was open for use in the fall of 1996.