Record everything you write, hear or say. Replay your meetings or lectures simply by tapping on your notes.Matt Jadud and Sandy Bolster -

Matt Jadud is using the Livescribe Pen device and software to make detailed lecture notes with video and audio playback.   This enables greater access for students in and out of class, and makes it easier to reuse assets from one semester to the next. For example, Matt describes the Livescribe smartpen as a useful part of teaching, both when working with students as well as in-class and addressing questions out-of-hand.

The Livescribe pen makes use of a special paper that you either purchase in notebook form or print on a laser printer; the copier/printers we have on campus work just fine for this purpose. To record a session, you touch the pen to the "Record" button that is printed on the pad itself; to stop, you touch the pen to the "Stop" button. The pen connects to your computer via a standard micro USB cable, and the provided software makes it easy to transfer your "pencasts" to the PC.

What is it Good For?

I use the pen in three primary ways:

I have never used it this way, but it is conceivable to task students with using the pen to do practicals/exams where they do their work using the Livescribe. They do not need to extract the pencast, fortunately---they can just give you back the pen.

In my experience, the pen is an excellent tool for making your process apparent. Students can see a process evolve, and listen to your thinking while you work. It is, essentially, a way of capturing a "chalk-and-talk" capture tool. It can be used in other ways (for example, when the students have it in their hands), but it is (as I currently use it) a way of capturing information that has a process or step-by-step nature.

More importantly: students cannot pay attention to this kind of material for more than approximately 10 to 15 minutes. It is best if you can create a series of pencasts that are 5-7 minutes long, as opposed to creating one pencast that is 15 or 20 minutes in length. Furthermore, you need to concentrate on your vocal production; the examples that follow are good examples of vocal production that tends to be flat and, frankly, boring/uninspiring. You are, essentially, in a recording booth, and you need to (somewhat artificially, until you get used to doing it) sound engaged and interested in what you are doing... even if you are only sitting at your desk, talking to a pen.

I have two sets of examples that I'll share. The first was recently created for use in my introductory electronics course. I was introducing voltage dividers, and students had a number of questions about how to do the calculations assocaited with them. In each case, I am simply working a problem while explaining my process. The first pencast is longer -- and, indeed, longer than I prefer to create -- while the second and third are shorter, as they represent repetition of the same process.

The second set of examples show how you can embed the pencast in a page. To do this, you must upload the pencast (publicly) to the Livescribe servers, and then you can embed a Flash object representing the pencast in your webpage. If you're not comfortable editing HTML, this path is not for you. Or, if you prefer, it is time for you to learn to write in the lingua franca of the most prolific publishing medium since the Gutenberg press.

I have embedded one of the pencasts here; it is about processing lists in the programming language Scheme.

Design Recipe for Lists
brought to you by Livescribe 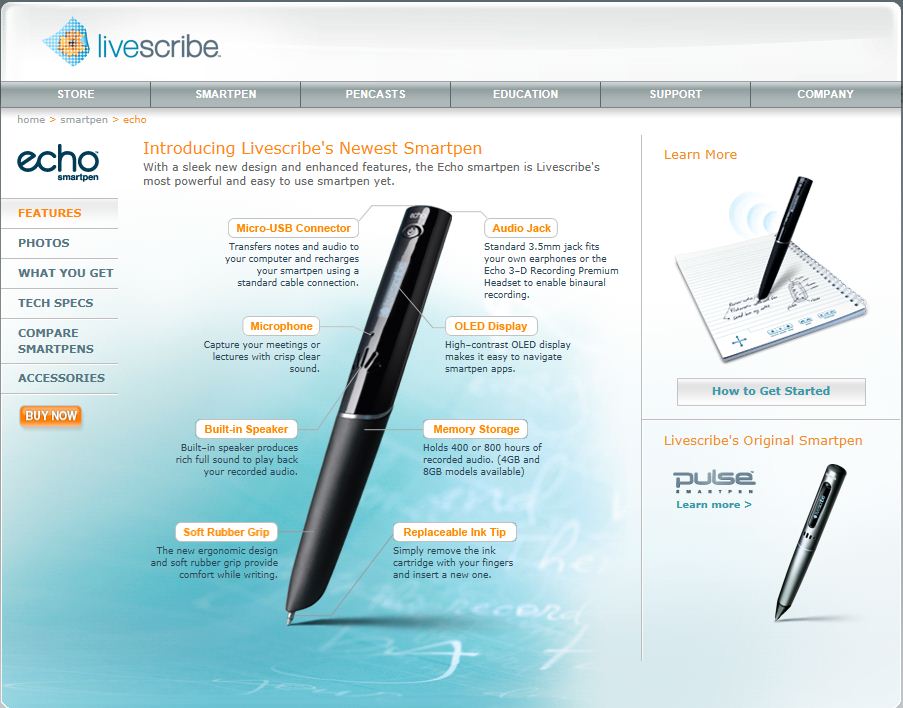