Educated and Organized: Women at the Center of Berea College History, 1850s-2000s: Essay

Essay by Dr. Jacqueline Burnside, Associate Professor of Sociology, Chairperson of the Department of Sociology 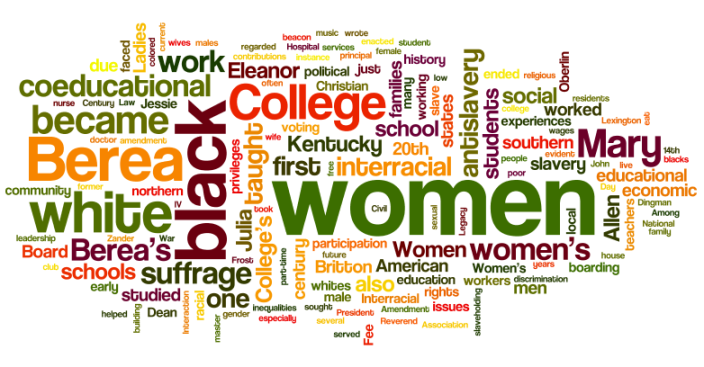 Essay for GSTR210 by Jackie Burnside

Educated and Organized: Women at the Center of Berea College History, 1850s-2000s

Abolitionist Minister Reverend John G. Fee started, in 1855, a coeducational school in Kentucky dedicated to Christian principles of anti-rum, anti-caste prejudice, and anti-sectarianism in religion. After the Civil War ended in 1865, Berea College resumed as one of the few schools in the South to attempt a bold experiment of “racial coeducation” by teaching white male and female students alongside black male and female students. The College was regarded with suspicion by many residents in the former slaveholding states. As a coeducational and interracial educational institution from 1866 to 1904, Berea College avoided significant sexual inequalities over appropriate school and work roles for women until the early 20th century, when BC women encountered institutionalized sexism in diminished recognition of women’s valuable leadership experiences and in unequal pay for comparable work. By drawing upon primary and secondary documents, this essay surveys local and national trends in women’s history, describes briefly biographical details about some of the courageous women who studied, taught, and worked at Berea College, and notes continuing issues for future research.

By the 1830s in slaveholding southern states like Kentucky, education beyond basic literacy was considered a luxury reserved for the advantaged, mostly free white males because few schools were coeducational. Oberlin College in Ohio became coeducational in 1837 and, with its location in a free northern state, could also admit black males and females, which marked it as a radical antislavery site for the young American nation. Berea College was modeled after Oberlin in many respects and several of Berea College’s early teachers, and the first President E. Henry Fairchild, studied or worked at Oberlin.1

Reverend John G. Fee became acquainted with Oberlin educated individuals through his antislavery work with the American Missionary Association (AMA), a network of women and men in northern and eastern states (with British affiliates) who wrote and spoke against slavery. Women speakers often faced hostility due to their gender and their antislavery message. For instance, Sarah and Angelina Grimke, daughters of a South Carolina planter, became agents of the American Anti-Slavery Society by 1837, touring New England but meeting opposition as the first southern white women to emphasize the plight of slave women as part of their public antislavery lectures.2

In the 19th century, during and after slavery, black women had to work for their own support and help their families, largely due to rigid discrimination against black men and low wages for the race. Thus, black families recognized the need to educate daughters, not just sons, for survival. Among white families of the working class, white women workers faced similar economic barriers of low wages as did black workers. By comparison, large numbers of white women of middle and upper classes only entered the workforce in the 20th century (74).3

Hence, Berea College, in the late 1860s, became a “city on the hill”, serving

as an educational beacon to poor whites and blacks. Among the first black students to attend were sisters, Julia Britton Hooks and Mary Britton. Julia also taught music at Berea and, Mary became a doctor, obtaining her license to practice medicine in 1902. Before becoming a doctor, Mary taught in Lexington & Fayette County schools, was president of the local Woman’s Improvement Club and helped found the Colored Orphan Industrial Home in Lexington. After moving to Memphis, Tennessee, Julia founded a music school, became a charter member of NAACP and helped to establish an Orphans and Old Folks Home.4

In the 20th Century, Berea College’s beacon to poor whites was evident in its outreach services to the Appalachian region. Helen Dingman became a ‘welfare pioneer’ of community development due to her work as Director of Berea College’s Service to mountain schools and supervisor of social training; she also taught the first sociology courses. Dingman edited Mountain Life and Work, and adapted the Danish Folk School idea into Berea’s Opportunity Schools from 1925 to 1950.5

Despite their similarity of interests in reforms for equal access to education, amelioration of sexual oppression, and suffrage (voting rights), white and black women experienced an “ambivalent interdependence” between white women whose privileges were dependent upon domestic work of working class black and white women (95). For instance, the white mistress and her black slave workers, especially house slaves, were working and living daily in a close, often intimate, household context with the white master. In her Diary from Dixie, Mary Boykin Chesnut wrote, “under slavery, we live surrounded by prostitutes. . . Like the patriarchs of old, our men live all in one house with their wives and their concubines; and the mulattoes one sees in every family partly resemble the white children.6

After the Civil War ended in 1865, Congress enacted the 14th Amendment in 1868. This was one of the “civil rights” amendments aimed to extend voting privileges. The alliances of blacks and whites hoped the new amendment would provide suffrage for all, but the 14th Amendment was restricted to “male” citizens. In some states where women had enjoyed partial suffrage, they now faced a gender restriction due to the federal Constitution. A former slave, and esteem antislavery orator and author, Frederick Douglass sought to explain that the black people’s urgency for black men to have suffrage was greater than women’s urgency.7

In the early years of the 20th Century struggle to win woman suffrage, northern leaders’ compromise with the southern club women led to discrimination by white women against black women and to segregated participation of black suffrage club women at conventions and parades with leadership by black women discouraged.8 National anti-suffrage strategies took note of Kentucky where in 1902, Kentucky had taken away the school vote from all its women in order to eliminate the Black women’s votes.9

Women’s participation in, not just contributions to, history occurred in the economic sectors, in community building by uplifting families through services from religious and social organizations (clubs). Women’s political participation was evident not just on antislavery or suffrage issues but also during political and electoral campaigns, and other national concerns of economic crisis, wars, imperialist expansion and international diplomacy (peace building).10

At Berea College, in 1885 a Ladies Board of Care was appointed by the College’s trustees though no explicit authority or budget accompanied the women’s appointment. At coeducational schools and women’s colleges, a substantial proportion of the first women employed were a sub-faculty of part-time teachers whose principal duties were disciplinary and social. Their titles were “Lady Principal, “Matron” and especially at coeducational institutions, the position of “Dean of Women” became common. 11 Berea’s Ladies Board included founder and faculty wives such as Matilda Hamilton Fee, women teachers such as Elizabeth Rogers, and the college president’s wife, such as Eleanor Marsh Frost. They monitored the social privileges and disciplinary cases of the women in the boarding hall on campus and provided oversight of the boarding halls in the community.12

During the 1880s and 1890s, numerous and prevailing diseases and illnesses, such as malaria, mumps and tonsillitis, occupied the attention of the Ladies Board of Care. By repeatedly calling on the Trustees to employ a professional nurse who would have “entire supervision of the care of the sick, administering medicines, and preparing proper food”, the Ladies’ Board laid the foundation of a health program that served as a catalyst for imp roving sanitary conditions not only on campus but also in the town. 13

In addition to their collective power, individual women used their influence when able. President Frost’s wife, Eleanor (b 1863 –d 1950) developed a life-long interracial friendship with Mary Eliza Merritt (b 1881-d 1953), the daughter of a local African American farm family. Mary was a Berea Academy student who lived and worked in the college president’s home. Mary graduated from Berea’s two year nursing course but, after the Day Law of 1904 ended interracial education at Berea College, studied at the Freedman’s Hospital in Washington D.C. to become a registered nurse in 1906. At the persuasion of her friend Eleanor Frost, Mary accepted the position as superintendent of the Red Cross Hospital in Louisville, developing the hospital from a 12-bed to a 100-bed facility with modern equipment by 1945. When Mary came to visit in 1921, Eleanor took her to eat at the college-owned Boone Tavern, the first colored guest to eat there. The next day, Eleanor was called by three people and thereafter, a private dining room was arranged for future colored guests to dine. 14

V. A Legacy of Interracial Interaction

There is a relationship between educational activity and organizing work that influences women’s skills to engage in social reforms. Note the experiences of Julia Allen who became Dean of Women in 1937 after Katherine Bowersox retired. Allen had both bachelor and master degrees and taught history part-time. She was a Christian Socialist concerned about labor inequalities and racism, and once sought political office in the Kentucky legislature but lost the election. Allen worked with Berea’s chapter of the Young Women’s Christian Association (YMCA) which hosted several interracial conferences in the 1930s and 40s. As Dean of Women, Allen facilitated the College’s racial re-integration after Kentucky’s amendment of the Day Law in 1950. As one of only five black students attending Berea College during those years, Jessie Zander remembers Allen as “a caring, considerate, and feisty” woman who showed “great concern for Zander’s treatment as a boarding student”.15 Jessie and her husband moved from Appalachia to Tucson, Arizona, where she taught and served as an elementary school principal before retirement. Active in the YWCA, Zander organizes programs to promote interracial dialogues about racial justice.16

Berea College is no longer regarded with opprobrium by neighboring southern residents since most historic problems involving slavery, economic exploitation and voting rights have been resolved. However, current students will discover that many distinctive features of their educational experiences are being shaped still by Berea’s commitments to maintain, and improve, its coeducational, interracial and culturally diverse community based on the religious principle that God hath made of one blood all peoples of the earth. Each current generation must strive to build upon the cornerstones of previous Bereans who studied to learn about the issues of their times and strove to develop collaborative solutions guided by vision and enacted with courage. What will be your contributions to uplift the people in the 21st century? 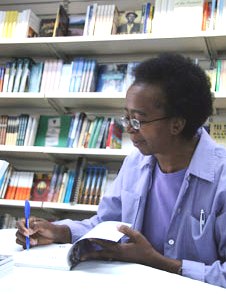