Apartment houses and Academy Buildings were moved or razed (i.e., Prospect, Rose and Marshall cottages) before the ground was broken 255 feet from Prospect Street for this women’s residence hall on October 6, 1949. Cellarius’ design relied on Colonial American residential types, especially Georgian. The design recalls plantation houses of the Virginia Tidewater area. . . Westover and Carter’s Grove come to mind. Anna Smith is one hundred fifty-eight feet long and forty-five feet wide and was designed with dormer windows on the third floor. This women’s residence housed eighty-eight women and two teachers-in-charge. Cellarius used Flemish bond red brick, with a brick string course and a modified dentil cornice in his design. Entrances at the ends and center front incorporate Doric pilasters. An entablature and the windows were constructed with flat brick arches and limestone keystones. A single story, decorative cast-iron-supported porch welcomes visitors to the entrance hall over flagstone floors. Most rooms were eighteen by fifteen feet with built-in closets on both sides of the door. A full basement with recreation room and laundry room,freight elevator and an incinerator were planned (Berea Alumnus, 20:1, 1949, 38-39+). Three kitchenettes and several parlors, two on the first floor and one each on the second and third floors were included in the architectural design. Furnishings came from Sears, Roebuck and Company, except for the desks and dressers that were made on campus by Woodcraft. Everything was new and nothing had come from former use in other residence halls (Berea Citizen, August, 2, 1949; January 26, 1950, 1; September 25, 1950, 1; and December 7, 1950, 1). The cornerstone contained a College Catalog, a New Testament, a Labor Day program, a photo of a tea where Anna Smith was honored, a Student Handbook, the College President’s 1949 Report, a Courier Journal, The Berea Citizen, Bereaway, the Wallpaper, Berea Alumnus, and a Freshman Handbook. 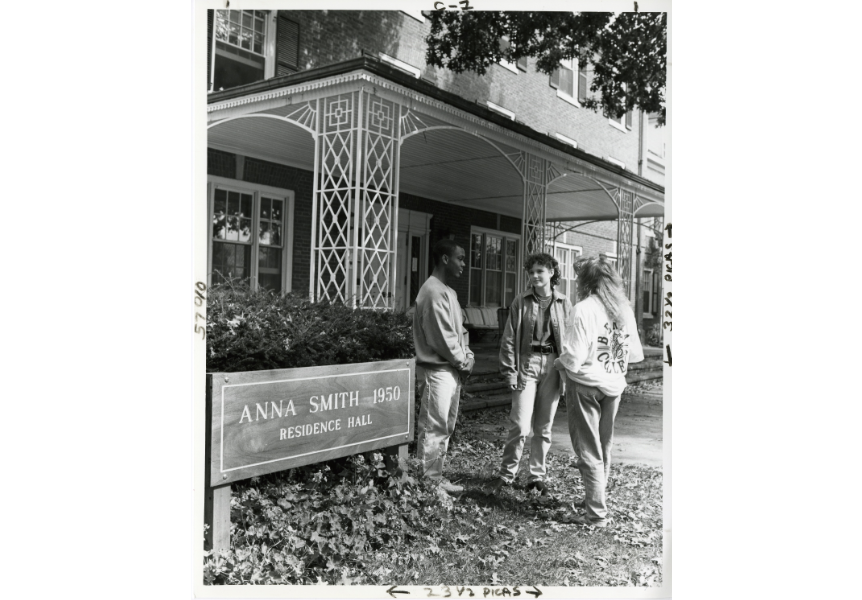 Eighty-eight students from Putnam Hall and Boone Cottage and two faculty supervisors (Miss Wyre and Miss Wilkerson) moved in on November 18, 1950. A tea was given by the students on November 24 during Homecoming, and the formal dedication was celebrated on December 2, 1950. Anna Smith Residence Hall was renovated during the summers of 1973 and 1975. Anna Louise Smith, secretary to President William G. Frost, came to Berea from Boston (1907) during the years Lincoln Institute was built and during the years of the Adjustment Fund. In 1911, she “went out from Berea as a field worker” taking the place of Mrs. Frost. She also worked during the time when the Pearsons-Kennedy Endowment Fund was secured and as the President’s Assistant helped establish the Adjustment Fund that was raised to establish Lincoln Institute. Miss Smith worked for the College from 1907-1935 (semi retirement from 1936-41) and in that time helped to raise $1,309,755.83. It was because of her efforts for the College that Seabury Gymnasium, Elizabeth Rogers Residence Hall, Hall Science Building, Kales Dam and Gray Auditorium were built. Upon retirement she lived at Boone Tavern. While construction for Anna Smith was nearing completion, the Berea College Board of Trustees “voted to [again] admit Negro students to the College under the conditions of the recently amended Day Law.” At the April Trustees’ Board meeting: “a resolution was passed to accept qualified Negro students from the Appalachian mountain region” (Berea Citizen, April 20, 1950).