Contrast House was part of a major program for "Home Improvement" in the Southern Appalachian Region initiated by Berea College, which sprang from early turn-of-the-century extension services into the local area and continued through much of the mid-20th century. Historically, Contrast House holds significance as a part of health, sanitation, education, domestic science, and war of poverty efforts in the United States, as well as Berea's unique contribution to these areas and contemporary ideas of thrift and simple living. Specifically, the Contrast House project began in the 1930s as a unique architectural experiment. Built out of chestnut cut from the Berea College forest, the building's rustic character was meant to appeal to the region's traditional sensibilities and need for low cost housing while providing modern amenities for the modern family, and conveniences for women working in the home.

The building was razed on [12] March 2012. A portion of the valuable legacy wormy chestnut was reclaimed by professor Alan Mills and will be used to construct commemorative furniture.

The College Archives still receives requests for copies of the plans for Contrast House each year, as alumni and others with fond memories plan to build similar structures on hunting properties or as retirement homes.

Moved for Construction of the Alumni Building: April 1959

Excerpt from Building A College: An Architectural History of Berea College by Robert Piper Boyce 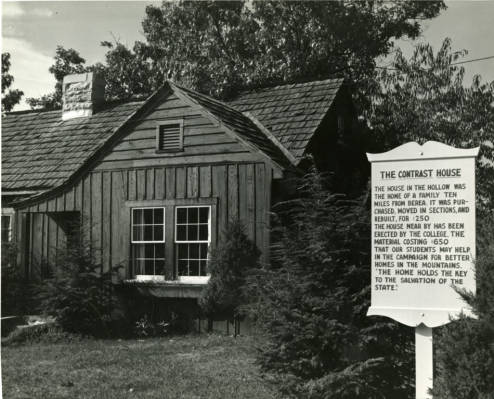 In a letter to President William Frost, June 19,1906, Cleveland Cady (College architect), stated: “a college of log cabins ...is a nightmare.” Instead, a college should “give the student fine examples of architecture; the best that can be built, should be [built].” The Olmsted Associates were also opposed to vernacular mountain architecture on the campus. Such sentiments were similar to thoughts written by Thomas Jefferson to John Adams at the time the University of Virginia was being built. The idea of a house to be contrasted with a typical vernacular Appalachian house seems to have come from Miss Mary Beatty Brady of the Harmon Foundation in a letter to President William J. Hutchins. She and other friends of the College gave the funds ($650) to build a model or contrast house and Mr. H. B. Earhart of Detroit gave the funds to move an indigenous house from Bear Wallow (costing $250). The Bear Wallow house was of the same square footage and served as the contrast. This project was accepted by the Prudential Committee in October, 1935; and the two houses, approximately forty-five by twenty-five feet in size, were built just south of Fairchild Hall at the rise of Scaffold Cane Road and between Gilbert House and Curtis House. In William J. Hutchins’ annual report of 1936 he said: “One of the supreme contributions of Berea College to the mountains must be the improvement of the home”. His son, Francis S. Hutchins said: “The Contrast House is to demonstrate that better living need not be difficult of attainment. The same material, the same amount of money, plus intelligent direction may result in a home of beauty.” The actual materials cost only $650. However, with the addition of student and emergency labor the cost rose to $1,500. If a person built the house himself, the theoretic price would be $650 (letter from E. Davis to WJ Hutchins, 1937).

At the same time Contrast House was being constructed on the Berea campus as a model for mountain families, American architect Frank Lloyd Wright was completing a private home outside Madison, Wisconsin. The Jacobs’ House was Wright’s first Usonian design and was the response to a challenge put to him by Herbert Jacobs that Wright design a contemporary house for only $5,000. Ideas of inexpensive housing and new building processes were a common industry and architectural debate in Depression Era America. Charles L. Williams (Supervisor) and J. Edward Davis (Director of the Woodworking and Drafting Departments) prepared the plans and specifications for Contrast House. By 1937, these plans and specs were made available to the public to be purchased for twenty-five cents from the College. For example: Berea’s Contrast House plans were purchased by Read Clark and the structure “was built by farm youth of Clay County (Manchester, KY) working on a project by the National Youth Administration”. None of these youth had had any carpentry skills prior to this project (Letter to W. J. Hutchins from Read Clark, March, 1939). Under the supervision of Mr. Davis, the Contrast structure was built by young boys of Berea’s Academy and Junior High Industrial Arts Classes to satisfy their student labor and also in accordance with National Youth Administration guidelines. The house was furnished under the direction of Eunice M. True and Marian Kingman and women of the College’s Home Economics Department. Women students designed the curtains and wove the couch cover. The interior was divided into a living room, kitchen, two bedrooms, shower bath, hall and attic. It had a fruit cellar, a stone terrace at the back and an outside sanitary toilet, an outhouse. The interior was paneled with wormy chestnut from the College Forest, had a beautiful field stone fireplace and chimney and had a roof of hand-made wooden shingles. Furniture was made by the Woodwork Department (Berea Citizen, May 13, 1937, 4; and November 5, 1936, 2; BCABG, 5.39). Contrast House opened on June 1, 1937, with the knowledge that “the [family] home held the key to the salvation of the state”. Seventy-eight percent of Berea student families were farmers tilling an average of sixty-eight acres of rural Appalachian soil, where only eleven percent of the houses had running water (PAR, June 1937). 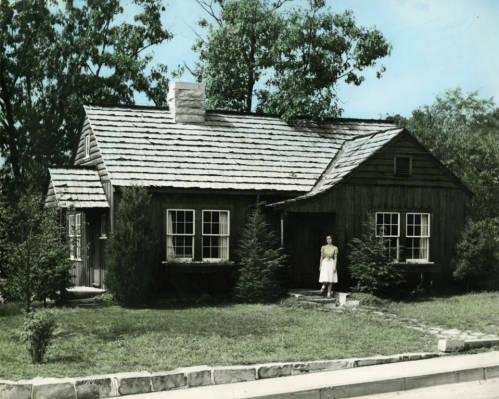 Articles discussing Contrast House appeared in the Christian Science Monitor (1939), The Indianapolis Star (1940) and the Louisville Courier Journal (1941). While still standing on Scaffold Cane, the families of Professors Robert Menefee (moved in during September, 1950), Lester Pross and Julian Capps lived in the structure during their early years on campus. The Bear Wallow structure was razed about 1949. Contrast House was moved (April, 1959) to a site west of the College Creamery and north of Broomcraft where it continued, with additions, to serve as a faculty/staff residence. Following this move, the Contrast House was enlarged, improved and refurbished with plumbing, electricity, water, an indoor bathroom and steam heat (Berea Alumnus, Winter 1988, 24). When the structure was first moved to its new location, Bill Ballard (Farm Manager) lived in the house. Safety and Security used the house for a time (Berea Citizen, April 9, 1959, 1). At publication, the use and security of the house are in question. The JJ & R Master Plan (1993) mandates its removal."