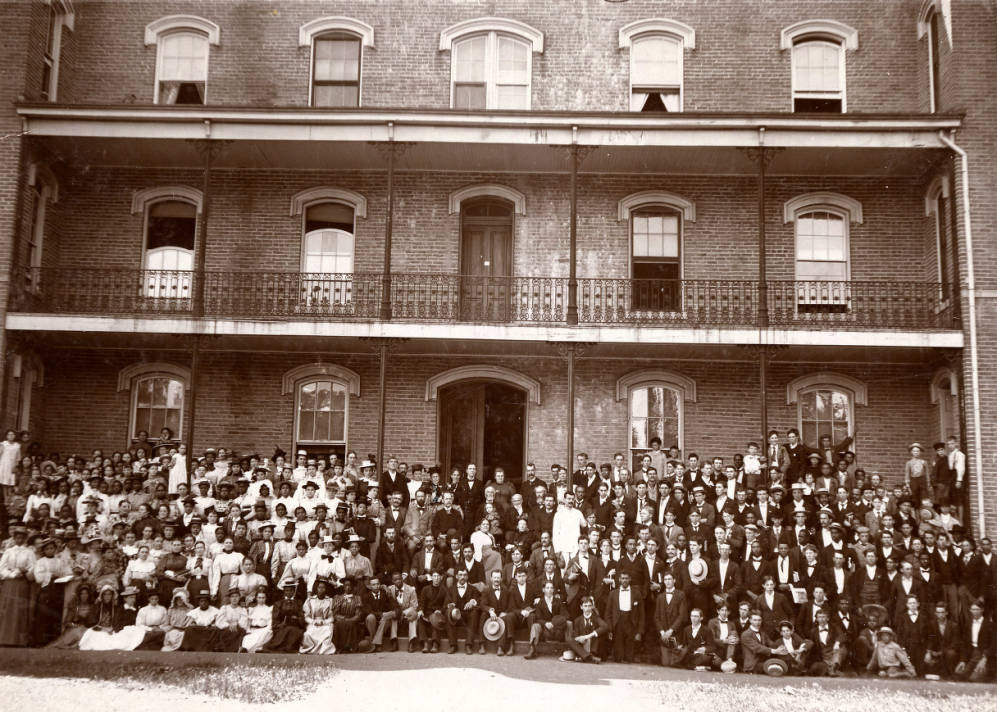 The Prudential Committee voted to seek funds for a ladies' residence hall like that at Oberlin (PCM, March 9, 1870) and land was purchased from Teeman Thompson for the site (PCM, June 28, 1870). Rufus R. and E. A. Graves of New York gave most of the funds for the College's first brick building. The Graves were active members of the American Missionary Association and members of the congregation of the Reverend Henry Ward Beecher. Fee, President Edward Henry Fairchild (1969-89) and Rogers laid out the site for the building, one hundred sixty feet from Chestnut Street; and construction of the foundations by J. Cowan began during September 1871 (PCM, September 26; October, 8,10,17,1871). Ladies' Hall was copied from the design and plans of Second Ladies' Hall at Oberlin (1865) where James Fairchild (brother of Berea's Edward Henry), Professor and lecturer on Architecture (later President of Oberlin, 1866-89), had "discovered" an appropriate Italianate style to address Oberlin's newly awakened concern for architectural taste. Though larger, Second Ladies' Hall, like Berea's Ladies' Hall, was plain with limited "tawdry ornament". Building style was expressed by geometric shapes and spare decoration (Building Utopia: Oberlin Architecture). It can not be a coincidence that the college Presidents, Edward and James Fairchild, shared the design of two Ladies' Halls which were built but five years apart!.

Berea's Ladies' Hall was begun with large ashlar foundation stones that were quarried and delivered by George Woolwine (PCM, October 3, 7, 1871). The timber was cut in the school forests, lime was burned in a College kiln and red bricks were made in a College brickyard south of campus in what was later the site of tl1e College gardens on land also once owned by Teeman Thompson (Berea Citizen, May 28, 1931, 5). These bricks were laid in common bond above the limestone sill of the foundation stonework (PCM, April 5, 15, 1872). During June 1873, additional funds were sought from Rev. Beecher's congregation to complete the building for the fall term. A dressed limestone stringcourse supports the second floor windows that in turn are crowned by projecting white-painted cast iron Italianate arches. Wooden double-hung windows are arched to fit the cast iron tops. The facia and console or bracketed eaves are supported at the attic by a soldier-bonded cornice. By the 1850s, tasteful architectural members in cast iron could be ordered from catalogs provided by foundries in New York. Cast iron had become a building material of choice!

The Chestnut Street facade of Ladies' Hall is symmetrical with a cast iron two-story porch, built in 1905, nestled between the two projecting ends. These end pavilions are crowned with broken pediments and each pediment is filled with a round "beef-eye" window that opens to the attic. A central arched pediment crowns the whole facade. President Fairchild described the building: "The two upper stories furnish rooms for ninety six ladies .... [ with] water tanks, water closets and bathrooms [installed] on both floors. Every room has a ventilator and a transom, and every lady's room [has 1 a closet. This building is surrounded with six acres of ground, embracing a large grove of forest trees at one side, [that go all the way] to the street ... " (Berea AJumnus, November-December, 1974,9). A picket fence was built around the six acres of graded lawn and oak grove, and a privet hedge was planted around the building during the summer of 1873, to provide privacy for the women.

Butternut and chestnut paneling created rather dark interiors. Rooms were furnished with one bedstead, a stove, one cotton "comfortable", a table, a washstand with a washbowl and pitcher, a looking glass, three wood slat chairs and a tin slop bucket (PCM, July 30, 1873). Bedclothes and other furnishings were to be provided by the women. The first floor housed a large parlor, library, reception room, music room and an office for the Principal of the Lady's Department. "The garret was one large room with a smooth nice floor over the whole, an excellent place for exercise or for drying clothes."

Cisterns were dug on the east and south sides during the fall of 1872, and water was pumped to a storage tank in the attic and then flowed by gravity to the various floors: "running water." Wood stoves were used to heat the whole structure. Male students pumped the water and used an "elevator" to hoist wood to the upper floors (Berea College, KY, An Interesting History, Cincinnati, 1875, 56-57). A large barn on the south side burned to the ground in late February, 1900, causing alarm that the wind would carry the flames to Ladies' Hall. The barn was lost but the residence hall was saved because of the quick action by students and town's people (BC, February 21, 1900). But much of the roof was blown off in a heavy storm in February 1904. An earlier boarding hall (twenty-eight by sixty feet) and a kitchen house (twenty-four by twenty feet) were built for the College in 1869. [The author has not been able to determine the location of this structure. Suggestions are that it was close to present day Boone Street]. During the fall of 1905, two boarding hall annexes were built on the west side of Ladies' Hall to accommodate five hundred more boarders. In 1909, electricity was introduced and the basement became a boarding facility (PCM, November 3, 1909); in 1911 the building was re-plastered and painted; in 1912, electric lights were installed; and during the First World War in 1917, steam heat and more extensive plumbing were added when the kitchens were remodeled for efficiency and to provide accommodations for 1,200 student boarders (Berea Citizen; PCM, May 10, 1917).

In 1911, meals for a week cost a student $1.50. In the 1930s pentagonal oak tables were set by waiters (boys whose labor assignment was also to wait on the table) and the dishes were washed by Freshmen girls (Robert Menefee). The author's father waited tables in this boarding hall during his Freshman year. Cloth napkins were used and proper eating habits were taught by observation and regulation. South of the building a pigsty was built to consume any boarding hall wastes. In 1928 the College purchased twelve dozen Thonet bentwood chairs for the dining room (these cost $3.00 each; PCM, April 26, 1928). ThIS boarding hall was transformed in the 1940s into a cafeteria-style dining room following the introduction of the US Navy V-12 officers and stainless steel trays were introduced and used  rather than china. Cost of meals was also raised to $5.60 a week (PCM, D b 13 1947) The last meal served from the Fairchild Boarding Hall was served on April 12 1961 when the kitchen and dining facilities were moved to the newly built Alumni "War Memorial" Building.

An etching of Second Ladies' Hall at Oberlin College was used in some of Berea's early pubhaty (1870s) and in various Reformers' periodicals as a visual means to draw interest to the College and its co-educational and integrated program. Later additions were constructed: the cast Iron porch, a gift of Trustee Thurston Ballard and designed by architect Cleveland Cady was built in 1905, the year of Ballard's death; and fire escapes made by Dow Wire and Iron Works of Louisville were added during September, 1912 (BCABG, 5.39, box 3).

In a letter to President William J. Hutchins (November, 1936), Mrs. Eleanor Marsh Frost suggested Ladies' Hall be renamed to honor the Fairchild family. The Trustees agreed; thus m May, 1937, Ladies' Hall was rededicated and named the Julia Maria Fairchild Hall to honor the only daughter of Edward Henry Fairchild, first President of Berea who arrived on campus m March, 1869, and served as President until 1889 . It was of course during President Fairchild's administration that Ladies' Hall was built. President Henry
Fairchild's son Charles, taught at Berea for ten years, served for thirteen years as Financial Agent Oberlin College and then became President of Rollins College, FL. Walter Fairchild, a New York attorney, son of Charles and grandson of Edward Henry attended the renaming ceremonies; the building's namesake, Julia Fairchild had died October 1936. The Fairchilds' ancestors had come from England to America in 1638 (Berea Citizen, May 6, 1937, 1). Ladies' Hall had been built during a period when Berea was shut off from the rest of the world but at a time when the school's founders were in touch with and often ahead of the progressive social, educational and religious movements of the nation.

Building renovations took place during the spring of 1962. The lower floor became a service area for the Campus; the Post Office, offices for the Student Association, the Pinnacle office, a barber shop, "Scissors Shop" and a faculty lounge were carved out of the former Boarding Hall (BTM, April 13, 1962). Fairchild was closed for the academic year and renovated for the centennial Founder's Day rededication in 1974. Students designed and built new furniture (beds and desks) out of finish eleven-ply birch plywood during the spring and summer of 1974. Rude Osolnik and Woodcraft directed this construction of the student projects. By September, eighty-two students moved into their new surroundings which were rededicated on October 3, 1974 (Berea Citizen, March 21, 1974, 9; September 26, 1974). A new slate roof was put on the building during the summer of 1982. Ed Conner, a contractor from Waco, KY, completed the job that cost $33,700 (Berea Citizen, September 23, 1982, 9). The building was damaged in a tornado during April, 1996.

Construction ond Renovotion, 1999
Fronk Messer & Sons, Construction Company,
Lexington, KY
Cost: Specifics not available
Fairchild Hall was gutted, renovated and linked to the Woods-Penniman "Crossroads" complex during a major campus-wide reconstruction project during the fall of 1998, and spring and summer, 1999. Student residents, the Collegium, Financial Aid, Career Development, Student Government, People Who Care, Chimes) Pinnacle, Black Student Union facilities and the Post Office were all moved out of the building to temporary quarters in January, 1999. The brick was cleaned, new double hung windows were installed, rooms were wired for computer connections, and an elevator and a geo-thermal air conditioning system were installed. Before classes began in the full of 1999 Labor and Student Life and Student Government offices moved into their new quarters in the basement and Student Payroll offices were moved back into the south extension of the first floor where they had been before the renovation. Except for being brighter, cleaner and technically more efficient Fairchild looks much the same as it did at the turn of the century. 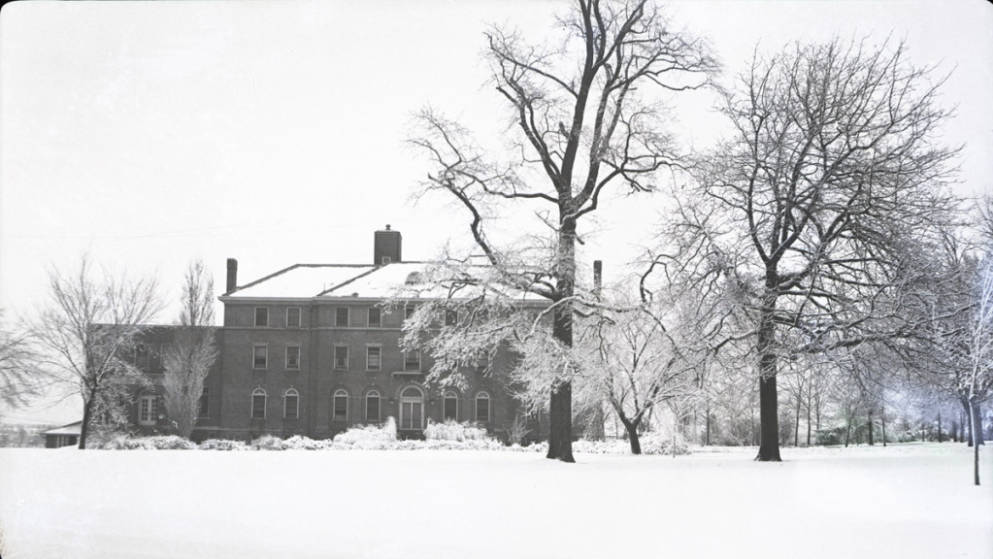