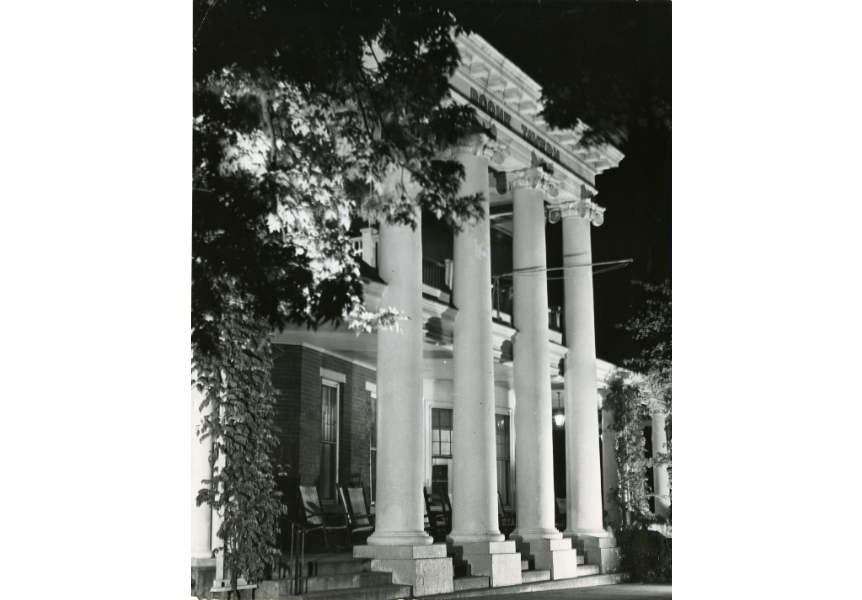 Built on "the old Dixie Highway which led from Cincinnati into the deeper South", the hotel was the brain child of Mrs. William G. Frost. Hoping for a hotel to accommodate guests of the College somewhere else than the President's House, Boone Tavern began as a two-story flat-tin-roofed hotel of 2S rooms strung out over storefronts on Main Street. It was to be a block of buildings that would house the Post Office and be a fully modern hotel. This business block, which had been authorized in 1901, stretched sixty-two feet along Prospect Street, l1S feet on Main Street and 110 feet on Short Street (PCM, June 13, 1907). Constructed by the Woodwork Department and built of College manufactured brick it cost about $20,000 ( Berea Citizen, July 4, 1907, 3). The Prudential Committee voted to name the hotel, "Boone Tavern" and to "procure suitable and substantial furnishings" for the electrically lit rooms. Rates were set at $2 a day for room and meals (PCM, June 26, 1909). The first patrons to register at the hotel came to visit the College in September, 1909. When the Tavern opened it was judged "an instant success and promised to become one of the hostelries dear to tourists and visitors in the South" ( Berea Quarterly, October 1909, 13).

Howard Taylor, the College Bursar and first manager, furnished and decorated the rooms with college-made cherry furniture and during the spring of 1910, expanded the hotel to a third floor "if it would yield income to justify the expense" (Frost Diary). Cleveland Cady again provided the plans and specifications for this third floor and specified slate roofs to replace the tin roofs. The $7,000 cost was taken from the Endowment funds (PCM, March 30, 1910; April 28, 1910). Two storefronts on the north side were purchased by the College and with new windows, expanded the dining room in the summer of 1911. The College purchased the wood framed Coyle store on Main Street, tore it down and built a brick block on the site during the spring of 1912 (Frost Diary). In a contract with the College, the US Post Office occupied the southwest corner of the hotel (Prospect and Main Street; PCM, December 16, 1909). Running water and baths were added to "thirty of the best rooms" during the summer of 1915 (PCM, June 23); and in 1921, a new block of commercial buildings designed by Garber and Woodward of Cincinnati was built north of the Tavern on Main Street. Owned by the College, these retail spaces have been occupied by various businesses ever since they were built (PCM, December 9, 1919; PAR, June 1921; PCM, September 8, 1921).

Mr. Burgess supervised the construction of a common bond brick garage and service station that were added at the back of the hotel and parallel to Short Street during the summer of 1916. It cost about $S,600 and measured sixty-six by forty-seven feet. This garage was then enlarged in 1918 to extend to Jackson Street. The garage became an authorized Ford Dealership in September 1933, and was later leased to Ray Grant beginning in August 1944. These services opened onto Jackson Street (Berea Citizen, September 7, 1933, 1; and August 3, 1944, 1).

The space in the Tavern Garage was renovated in 1968 to house the Appalachian Museum that opened on February IS, 1971, with Harry Segedy as director. A collection of furniture, tools, and artifacts of Southern Appalachia was given to the College and was stored and displayed in this new museum space (The Simms Collection from Gatlinburg, TN, was given by the heirs of Edna Lynn Simms; this collection was joined by that of Silas Cheever Mason, a Berea professor ( 1897-1907) and farm extension agent. Segedy worked for about two years sorting and cataloging these Appalachian collections before the College museum exhibitions could be opened. In 1969 the College had instituted Appalachian Study courses and established the Appalachian Center. This Center was housed in the Edwards Building under the leadership of Loyal Jones (Berea Citizen, February 18, 1971). The museum was closed on April IS, 1998, and with renovation of the Bruce Building during the summer of 1999, it was moved into better storage and exhibition spaces and became part of the new Appalachian Center. This space was again renovated ( 2004) and as of publication, serves as the College's Public Relations Office and site of tourist information. 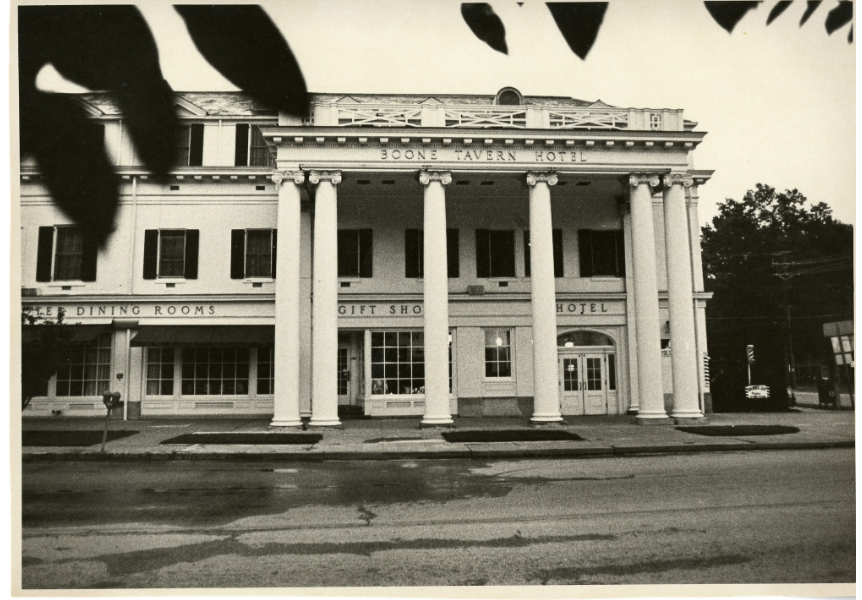 In 1927, a coat of white paint, a large composite Ionic order portico and a more elegant symmetrical entrance were added to the Tavern on the south side to accent the facade that faced the oncoming traffic of the Dixie Highway. A new dining room was expanded into and absorbed the store of Potts and Engle that in turn opened onto the new lobby. Part of the Potts store was used as a gift shop and could also be entered from Main Street. Eleven new guest rooms occupied the Richardson property on Short Street and were equipped with tub and shower baths, steam heat and electric fans. (This frame clap-boarded building was razed during the spring of 2003 and a new pedestrian center was constructed on this site.) A Tea Room opened on July 25, 1927. College architect, George H. Gray designed these new additions that were opened to the public in November ( Berea Citizen, June 30, 1927, 4). The architectural changes cost $11,4000.

Richard T. Hougen became Tavern manager in June 1940, and served the College until 1976. During his tenure, Hougen (cooperating with the Kentucky Restaurant and Hotel Association) developed Berea College's program in Hotel Management which may have been the state's first such program (Robert Menefee, Professor of Business and Economics). Under Hougen's management the Tavern underwent a $550,000 modernization that was carried out by the Hargatt Construction Company, Lexington (1953-1955) and was furnished with "a homespun type" modernization consisting of furniture produced by students in Woodcraft and hand-woven fabrics from Fireside Industries. This modernization consisted of 14 new rooms, an enlarged dining room, a new two-storied columned west entrance facing traffic from the newly routed US 25, a new fully equipped kitchen, storage room, walk-in refrigerator room, new heating and air conditioning and internal fire escapes. This now brought the number of guest rooms to seventy-five (BTM, April 17, 1953, April 22, 1955; Berea Citizen, December 30, 1954, 1).

At the time of the Tavern renovation, the College also built a new property on Center and Main Street and one on Center and Short Street. Two of the stores on Main Street had a second story added (BTM, November 13, 1954; April, 1954). A parking lot was constructed at the back of the building on Short Street during 1965 ( Berea Citizen, May 4, 1978). During 1972, the Tavern housed 203,000 guests. The Lexington Herald- Leader said at Richard Hougen's death that he made the Tavern "one of the most well known dining and lodging establishments in the state" ( Berea Citizen, March 27, 1985, 3). Boone Tavern was designated an "Historic Hotel of America",October, 1992.

The Hotel underwent renovation and refurbishing on two later occasions. The College Board of Trustees voted $300,000 for the first renovation ( Berea Citizen, January 28, 1988) and later in 1994-95, when the whole Tavern was upgraded and renovated. This ten-month renovation of the heating, electrical and plumbing systems and a new elevator cost $1.8 million. Rooms were enlarged and other rooms were combined to create only fifty-seven guest rooms. New baths were installed in each room. David Van Dellen, Manager and associate of Marriott Hotels, directed the latest renovation project ( Berea Citizen, November 9,1995, 5). The College signed an agreement with Marriott Hotels to manage the hotel. Fewer students now meet their labor assignments there and managers have come and gone more frequently. A period of management instability ushered in the twenty-first century. Brick and Tile Yard, 1901-1902 Cost: $2,500 During the nineteenth century building campaigns, Berea had at least two brickyards. The first was south at the edge of the College gardens and the second one was over the ridge north of the Tabernacle and Howard Hall. The Board of Trustees authorized a third brick and tile plant at their June meeting, 1901 (BTM, June 5, 1901 ). Built at Rucker's Knob (Dead Horse Knob) this brickyard was constructed for at least two reasons: great quantities of bricks would be needed for future building construction and the College needed an industry for male students. The first bricks were hand made, but when construction of  the Industrial Building (Edwards-1903) and the Main Chapel (Phelps Stokes-1904 ) were begun, machinery was purchased for more speedy production. The Berea Citizen, May 22, 1902, indicated "work on the new brick and tile plant  was going on rapidly. A Creager's Sons brick machine, capacity 15,000 a day, was already  installed [but the engine to run the machine] had not yet arrived. [In addition] a switch to the L & N Railroad was provided and the prospect for manufacturing brick at an early date was good". When in high production the brickyard could produce about 25,000 bricks a day. A. B. Arthur was appointed superintendent of thirty-three student workers in 1901 (he later was appointed superintendent of the farm 1908-11). "The College brickyard received its first order for a carload of bricks in early August and the first kiln of bricks made largely by students was being burnt" ( Berea Citizen, August, 1902). In 1908, Samuel Clark became the Brickyard superintendent.Because students often had only two hour periods a day for their labor positions, most of the production took place in the summer or by fathers of students as a kind of "proxy labor" (  Berea Quarterly, January 6, 1906). By 1906, the Brickyard had four kilns and excess production was shipped to other cities. The Brick and Tile Yard was "closed out" on January 14, 1911 (Frost Diary).