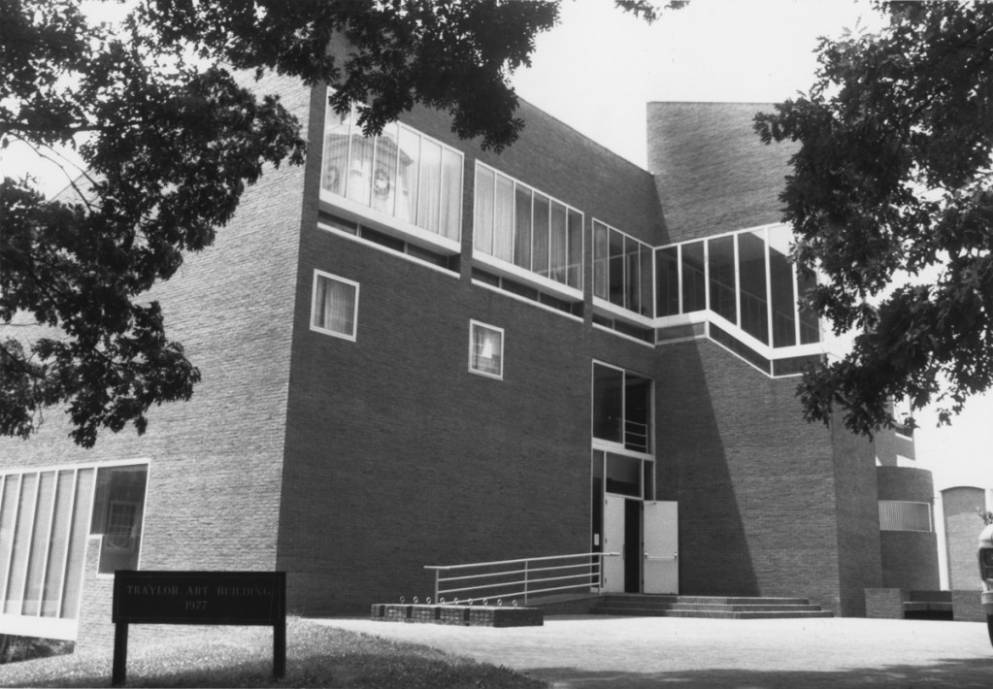 College Trustees voted to build an extension to the Rogers Art Building during their fall meeting 1974. The very contemporary designed structure was built as a memorial to Melvin A. Traylor and was partially paid for ($500,000) by his son Melvin Alvah Traylor, Jr. (BTM, March 6, 1934). Melvin Traylor was born in a log cabin in Adair County, KY; was a lawyer, banker, director of twelve American corporations, a Berea College Financial Committee Trustee (1926-1934), President of the First National Bank of Chicago, and was also nominated as the Democratic candidate for United States President in 1932. Barry Bingham, Trustee, newspaperman and philanthropist, served as the general chairman of the fund drive to pay for this new building. Solicitation started in 1975, with gifts of $100,000 from the Booth-Harris Foundation, New York (Berea Citizen, April 24,1975,12) and a Kresge Foundation challenge
grant of $100,000 (Berea Citizen, Augnst 5, 1976, 1). At the ground breaking ceremonies, President Willis Weatherford turned the first spade of dirt. Department Chairman, Lester Pross, at the dedication of the new Traylor Building in sum said: "This was a building for people created not to expand the arts program but to improve what the faculty and staff were already doing." 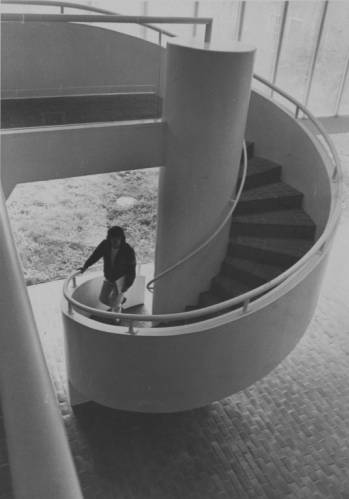 The four-storied, 29,000 square feet structure was designed to house a library, gallery spaces, an archival climate controlled art collection storage room, restrooms, fibers, design, painting and drawing studios and faculty offices. Galleries dedicated to Doris Ulmann were finally a reality. Though not completely finished, this new art facility opened for classes during the fall term of 1977 (Berea Citizen, May 2, 1974; March 25, 1976, 1; Augnst 5, 1976;.April 27, 1978). Hisaka's design used running bond red brick on large uninterrupted wall planes as can be seen on the north, east and south. When windows were introduced into this surface, they were like a stretched skin and rested in the same plane. Curtains of glass in steel frames covered the south and west exterior walls. Floors were polished concrete or raw brick. The brick floors of the galleries and library continued out the east entrance to form a sculpture terrace linking Phelps Stokes to the Traylor Art Building. Intense colors (yellow, green, purple, red-orange) were chosen·
for the floor coverings, open air conditioning ducts, water and steam pipes, restroom tiles, and stairways. The whole ensemble was an open geometric volume of color and light that broke aesthetically from the "Berea Georgian" style. Traylor was connected to the original "Art House" by a glass link umbilical cord that gave easy visual access to the front lawn and back oak grove.

Following the opening of the new Traylor Art building, the Rogers Art Building was refurbished and renovated by J. M. Hawkins Construction Company, Lexington, and reopened to the public during the spring semester, March, 1978. The four studio spaces on the top floor in the original building became two large studio spaces (printmaking and a photo studio). The main floor was transformed into offices for the chair and labor supervisor, an enlarged slide storage room and a computer room. The original Rogers' art library became an intimate gallery space when the walnut bookshelves and furniture were removed and a large enclosed glass wall vitrine, storage cabinets, carpeted walls and five large windows opening to the oak grove were installed. Following tornado damage in April, 1996, parapets and roofs had to be repaired.