Cottages
Housing  for students  and  staff was a major concern throughout the history of the School. Consequently, the College either built houses as dormitories or purchased houses and moved 'them to locations  best  suited to the pressing  needs  of the period and enrollments of students. However, architect  Cleveland Cady cautioned  against building structures that merely repeated the mountain  environment  as a cluster of cabins. College buildings should be "as the best old time buildings of the 'Bluegrass' region . . . broad, solid, self-respecting ...but without  pretension.  A College of log cabins would be a nightmare", he wrote Frost (letter to President Frost, June 19, 1906). Many of the houses were built or purchased from funds raised by Eleanor Frost during her many trips into "donor territory". These cottages often served as "practice houses" and or "models" for better living. They were literally scattered all over the campus.

Miss Corwin's house was built in a Queen Ann style with wooden fish-scale-like siding, rusticated almost boulder-like stone foundations, projecting up-swept eaves, and a symmetrical but faceted front porch with wooden Doric posts and classical entablature. Built on Big Hill Pike at the southeast edge of the Academy Campus, this College Librarian's house (Miss E. Corwin) was purchased by the College in 1911 at a price of $1215 (PCM). Though built by Miss Corwin, the house gets its present name, ARK, because three faculty staff women lived in it for many years (A-Adelaide Gundlach-Registrar,  R-Ruby Helen  Cain and K-Katherine Bowersox-Dean of Women and Instructor  in the  Normal  School). The name comes from a first letter of the women's names. Faculty members and later students have used the house as part of the College's staff housing and residence halls. The house was renovated in 1987 and serves as a designated women's  residence. 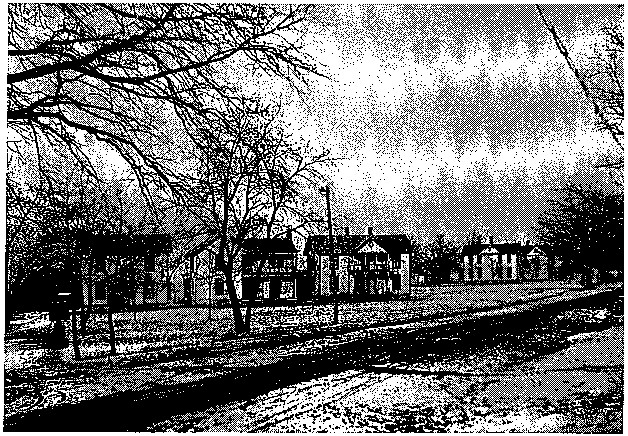 During  the  beginning  years  of  the  First World War, six houses were purchased and moved to the north end of the girls' Vocational Campus,  at  the north end of Talcott Hall along the old Richmond Pike,  and were  named  alphabetically  for trees (Berea Citizen, Dec. 16, 1915, 8). All the houses were occupied by women students. The W. F. Kidd House at the corner of Short and Center Street, bought in 1914 for $9,000, was  moved  in  1918, and became Ash  Cottage  to house Vocational Girls (Frost Diary); the W. Bogie House on Center Street was purchased for $2,000, became Beech  Cottage and was first used for girls in 1915 (PAR); Cedar Cottage was built by the College; Hope Cottage on Richmond Pike became Dogwood Cottage; the I. C. Davis House which opened onto Center Street was purchased in 1911 for $4,000, was used as a residence for men on the npper floor, and then was moved to become Elm Cottage and used by girls in the Normal School in 1915 (Frost PAR); and the Hart House, on a lot across from the opening of Rawlings  Street, became Fir Cottage to house Vocational Girls in 1914  (PCM; BCA Vertical  Files,  5.39). For insurance and cost of up-keep reasons, all of these cottages were  razed  during the 1970s.