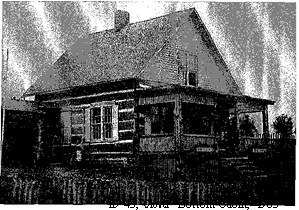 The "Weaving House ...a heartening  example of log architecture," was built on the corner of Jackson and Rawlings Street and was the first headquarters for the Berea Fireside Weavers. The poplar  logs had  once been  part  of a Baptist Church House at Clover Bottom near the Jackson County line. Hettie Wright Graham, from Flushing, New York, who was in charge of the Berea "Weaving Industry-the wheel,  dye kettle and loom" was the first to live in the twenty-six­ by-twenty-eight feet structure. A multi-windowed shed was connected to the cabin to be used as a loom room. An additional log house which once housed Berea teachers and said to be a hundred years old, was moved near by and it too held looms and spinning wheels ( Berea Quarterly, April, 1904,  5-7). Mrs.  Graham was  not  only  supervisor of women  student weavers,  she was  also in charge of purchasing and sales: "For the benefit of those intending  to  compete for the prizes  offered  by Berea College for the best dyeing, Mrs. Graham will have for sale at Clover Bottom Cabin on Jackson Street, indigo and madder.  These  dyes are the  best to  be  found  on the  market  and require less work than inferior ones usually sold in stores. Prices for East India indigo are 15 cents an ounce and Dutch madder, one cent an ounce" ( Berea Citizen, May 29, 1902). Mrs. Graham also bought black fleece for spinning and weaving (BCABG, 5.39). It was she who selected the traditional weaving patterns ("Missouri Trouble", "Young Man's Fancy", "Federal City", "Dogwood Blossom", "Chariot Wheels", etc.) and established a standard of workmanship for the weavers. The cottage was rebuilt and baths were installed to make the structure better suited for residency (PCM, February  12,  1913).  To improve the cabin's aesthetics, some architectural  details were incorporated  in the  exterior design; the porch  was supported by unturned rustic cedar posts and "gingerbread' brackets were added at the  roof soffits. During the most recent years, the   former College Dentist has lived in the house.