Dr. John Raphael Rogers, son of John A. R. Rogers, College alumnus (class of 1875), inventor and a Berea College Trustee for 36 years (1897- 1934), gave $50,000 in securities for a new art building that would honor and be named for his father. John A. R. Rogers first came to the Berea Ridge in 1857, was Berea's first school Principal, and was a member of the first Board of Trustees,1858-1906. He resigned as Principal in 1878, to take a pastorate at the First Presbyterian Church in Shawano, Wl. His son, Dr. John Raphael Rogers was also a Trustee of Oberlin College (1909-28) and the American Missionary Association. He had over 500 patents and had been co-inventor of the Mergenthaler linotype printing machine. The gifted security funds, with other moneys, were used to establish a fund from which to construct the Art Building (BTM, November 18, 1930). Dr. Rogers died a few months before the building was completed. Fill, grading and foundations were begun during the spring of 1933, but the cornerstone was not laid until October 5, 1934. This stone held a photo of Principal Rogers, a College Catalog, the Treasurer's Report, the Annual Report of President William Hutchins, a copy of "The Birth of Berea", a list of Faculty appointments, a copy of The Chimes, a Berea Citizen, a Student Manual, The Berea Alumnus, "Pioneering in Berea"-address by J. R. Rogers, and addresses by Mrs. Frost, Mrs. Peck, University of Chicago President Robert M. Hutchins, President William J. Hutchins and Dean of Labor We idler (BTM, March 17, 1933; March 16, 1934). 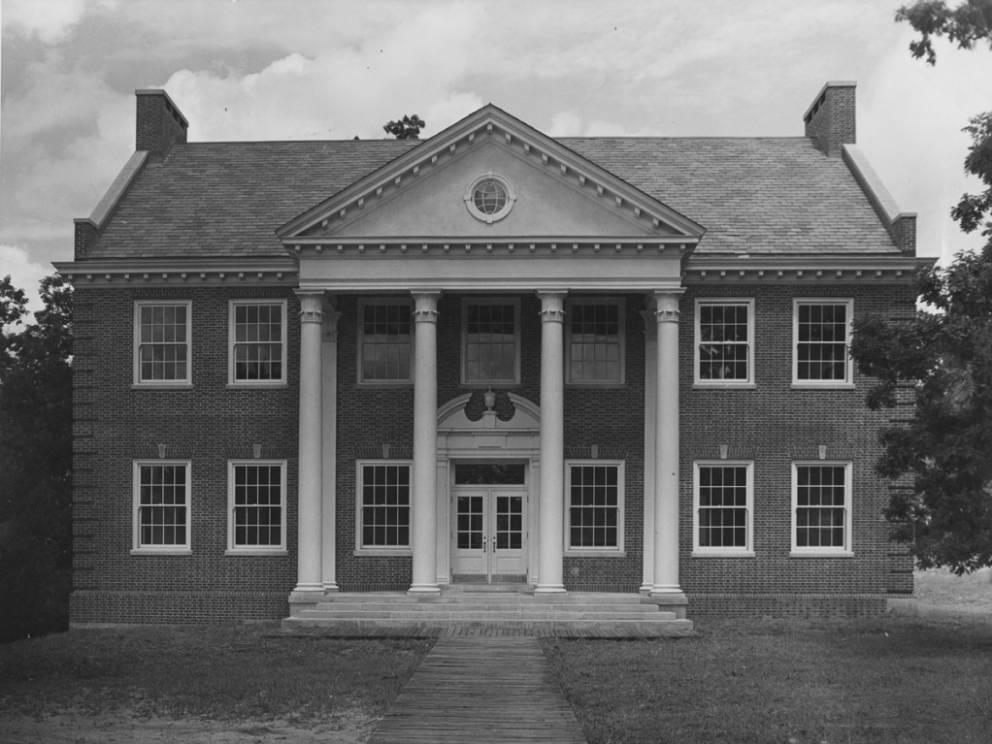 Professor Clarence Ward, Chair of the Art Department of Oberlin College and authority on European Medieval Art, had consulted on the design of the building. Architect Cellarius described the style as "marked by simplicity, economy and homelike character" over a fire-proof body. As with other Cellarius' designs, the structure is a southern plantation colonial Georgian style "residence" using red brick laid in Flemish bond, double-hung windows and a four columned portico whose capitals are reproductions of those on the Classical Greek Temple of the Winds in Athens, Greece. The columns and pilasters are un-fluted. Brick quoins, brick flat arched windows and a wooden facia and cornice with dentils dress the facade. An English Chippendale-like broken arched pediment with a central urn and Doric pilasters enhance the entrance doorway. The west side incorporates central indented arches and a broken fan lit attic. The grounds were deeply filled, graded and planted during the month before the dedication of the building.

The 6,500 square feet of space of the "Art House" was furnished with a central walnut paneled library whose walnut furniture was designed by faculry member Joseph Cantieni and built by the College's Woodworking Department. Each chair has the name of the student worker who made it written in pencil under the seat. Cantieui later (1941) became an industrial designer for Bethlehem Steel, PA. "Tree of Life" and "In the Midst of the Garden" curtains for the library were designed by Art Department faculty members and woven by girls in the student industry Weaving Department. The office curtains were designed by an art faculty member and block printed to represent details of "The Dixie Highway", Chestnut Street, which ran in front of the building (BCABG, 5.39, box 3 & 4). Over-doorway pediments, Doric friezes, low basket arches supported by pilasters and acanthus scrolls enhanced the Classical detailed entrance lobby. All openings are framed by moldings. Mrs. Kenneth (Elizabeth Barrett) Gould was Director of the "College Art Interests", developed the College's art classes and superintended the project incidentals while the art building was being
constructed (PAR, June, 1935). Mary Ela, Chairperson when the building opened and during the Depression and War years, assisted in the decisions regarding all the College's "Art Interests": design, color, shape and form. She considered the arts to be a living language that could be both practical and aesthetic. Mary E. Welsh and Eleanor Frost had taught arts courses at the turn of the century.

Mary Welsh had first come to Berea in 1902 to teach languages. While here she taught Greek, German, art appreciation and served as Dean of Women before she retired in 1932. A tablet "expressing with appreciation the work of Mary Welsh in building up the Art Department" was placed in the lobby of the building (an oil portrait of her was given to the Department by a nephew, 1998). In 1935, the Board of Trustees accepted a gift of $15,000 from the estate of New York photographer, Doris Ulmann "for the building of the Ulmann Gallery" and an additional gift of $10,000 was given in 1950. Along with this monetary gift came a gift of more than 3,000 photographs she had made of people and places from Canada to Mississippi (BTM, November 15, 1935). Most photographs were posthumously printed. In 1957, Mrs. H. A. Metzger gave the College a gift of paintings and seventeenth and eighteenth century Italian velvets and embroidered textiles. During the fall of 1961, Berea College received the Kress Study Collection of thirteen Italian Renaissance paintings and sculpture from the Kress Foundation, New York. The Kress Foundation had been a major and sympathetic donor to the College since 1948. A teaching professorship honoring Morris B. Bellmap, Jr., was established in April, 1954. Probably the singly most memorable full year sophomore course taught at Berea was called Humanities, a course interconnecting Art, Music and Literature. Professors Tredennick, Hovey and Smith worked collaboratively to develop this memorable course.

Speeches were given by Clarence Ward of Oberlin and Allen Eaton of the Russell Sage Foundation during the day of dedication, April 26, 1935. The Metropolitan Museum of Art in New York City loaned an exhibition of paintings by such notable artists as Inness, Reynolds, Gainsborough, and Chardin and the Russell Sage Foundation loaned an exhibition of Southern Handicrafts that was
sponsored by the American Federation of Arts (Berea Citizen, April 18, 1935, 1). A guard was hired to sit with this exhibition at nights (PCM, April 29, 1935).

The College Trustees decided that all art gifts given to the College would be under the administration and care of the Art Department and a room was set aside for the safekeeping of this new, growing and increasingly valuable collection (TCM, January 15,1935). The Department was created in 1935, the major was begun in 1938 and the College graduated its first art class in 1942. Specific funds to preserve and care for the art collection were not included in the Art Department budget until 2000, under the Presidency of Larry Shinn.