Reference book of the month: The Jim Crow Encyclopedia

March's reference book of the Month:  The Jim Crow Encyclopedia

Jim Crow refers to a set of laws in many states, predominantly in the South, after the end of Reconstruction in 1877 that severely restricted the rights and privileges of African Americans. As a caste system of enormous social and economic magnitude, the institutionalization of Jim Crow was the most significant element in African American life until the 1960s Civil Rights Movement led to its dismantling.
Racial segregation, as well as responses to it and resistance against it, dominated the African American consciousness and continued to oppress African Americans and other minorities, while engendering some of the most important African American contributions to society. This major encyclopedia is the first devoted to the Jim Crow era. The era is encapsulated through more than 275 essay entries on such areas as law, media, business, politics, employment, religion, education, people, events, culture, the arts, protest, the military, class, housing, sports, and violence as well as through accompanying key primary documents excerpted as side bars.
This set will serve as an invaluable, definitive resource for student research and general knowledge. The authoritative entries are written by a host of historians with expertise in the Jim Crow era. 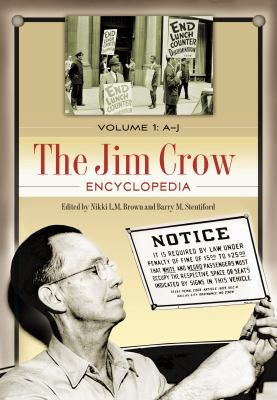 ~ Recommended for students majoring in African-American Studies, history, and peace and Justice Studies~